An article on the Battle of Beersheba promotes a historical inaccuracy.

On November 1st an article titled “Battle of Beersheba charge recreated for centenary” was published on the BBC News website’s Australia and Middle East pages.

In among an otherwise reasonable account of the commemoration of that First World War battle, readers found the following two paragraphs: 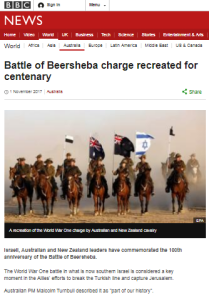 “The Battle of Beersheba led to the Balfour Declaration – the first time the British government endorsed the establishment of “a national home for the Jewish people” in Palestine.

While many Israelis believe it was the foundation stone of modern Israel and the salvation of the Jews, many Palestinians regard it as a betrayal.” [emphasis added]

The Battle of Beersheba took place on October 31st 1917. The Balfour Declaration was published just two days later on November 2nd 1917. Apparently though the BBC would have its audiences believe – as the use of the words “led to” indicates – that it was the allied forces’ victory in that battle in the Negev desert which caused Lord Balfour’s letter to be written.

That, of course, is an inaccurate representation of events. The document published on November 2nd 1917 was in fact the end product of several months of drafts, revisions and consultations, as the Balfour 100 website explains:

“Balfour’s November 1917 typewritten letter to Rothschild was ‎drafted after a great deal of back-and-forth within Lloyd George’s government and considerable input by Zionist leaders led by Nahum Sokolow (1859-1936) and Chaim Weizmann (1874-1952); and by British Jews adamantly opposed to Zionism.

On June 13, 1917 Foreign Secretary Arthur Balfour met with Lord Walter Rothschild, leader of the British Jewish community, and Zionist statesman Chaim Weizmann and suggested they submit a draft document encapsulating their hopes for Palestine that he could submit for Cabinet discussion.

The formula which the Zionists preferred was submitted by Rothschild to Balfour on July 18, 1917.

But the to-and-fro over the letter’s wording continued. […]

On October 6, 1917 the War Cabinet decided to send out the latest draft text to eight Jews—four anti-Zionists and four Zionists—for comment. The cover letter acknowledged that “in view of the divergence of opinion expressed on the subject by the Jews themselves,” the Government “would like to receive in writing the views of representative Jewish leaders, both Zionists and non-Zionists.””

One of the four anti-Zionists was Sir Philip Magnus, whose response can be found in the National Library of Israel. Also on October 6th 1917, the British sought the opinion of the US president Woodrow Wilson and, as Martin Kramer documents, the French government had also expressed its approval for “the renaissance of the Jewish nationality [nationalité juive] in that land from which the people of Israel were exiled so many centuries ago” in June 1917 in the Cambon letter.

In short, the Balfour Declaration had been a ‘work in progress’ for at least five months before the ANZAC forces won the Battle of Beersheba and the BBC’s claim that the victory against the Ottomans “led to” Lord Rothschild’s letter is historically inaccurate and misleading to audiences.

Following communication from BBC Watch, the article was amended and the first paragraph now reads:

“The Battle of Beersheba came days before the Balfour Declaration – the first time the British government endorsed the establishment of “a national home for the Jewish people” in Palestine.”