The Economist has been gushing about what it calls 'Morocco's little idyll of Jewish-Muslim coexistence'. Yet, the Nov. 2nd article it admits that only three Jews still live in Essaouira - a city which used to have as many Jews as Muslims before the great  exodus to Israel.

It’s November in Morocco – time for the annual fixture of the cultural calendar – the Essaouira Music festival.

The Economist has been gushing about what it calls ‘Morocco’s little idyll of Jewish-Muslim coexistence’. Yet, the Nov. 2nd article admits that only three Jews still live in Essaouira – a city which used to have as many Jews as Muslims before the great  exodus to Israel. 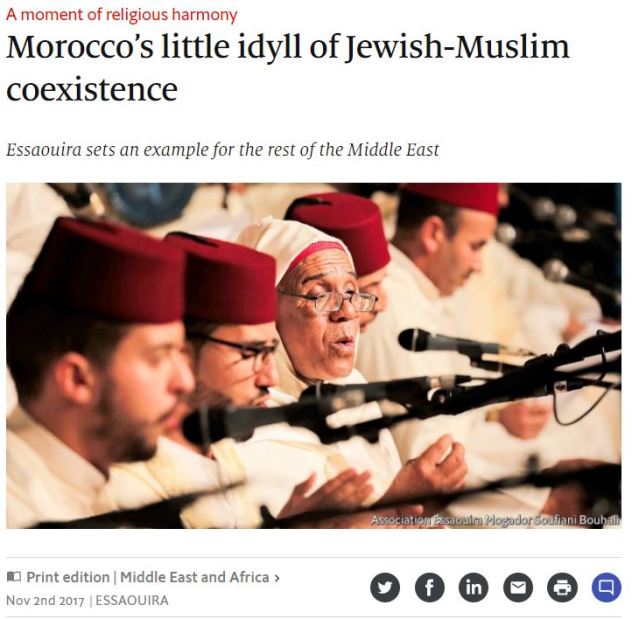 One of those Jews is Jacquy Sebag, who was attacked with an axe by Muslim extremists in 2002 during the Palestinian intifada. You would never guess that unpleasant things ever happened to Jews in Morocco, which the Economist portrays as a haven from European persecution.

It is true that many Jews expelled from Spain and Portugal in the 15th century fled to Morocco, but it is misleading to infer that Jews and Muslims had always coexisted peacefully. In 1492 the Jewish community of Touat was wiped out after incitement by the fundamentalist al-Maghili. The 15th century was also the century when thousands of beldiyeen, Jews who had been settled in Fez for centuries, converted to Islam.  Moroccan Jews suffered more massacres than anywhere else in the Arab world, including the Oujda and Jerada riots in 1948.

As the Economist correctly reports, no Arab country has gone to the lengths of Morocco to revive its Jewish heritage. There are sound economic and strategic reasons for this: Tourism  attracts 40,000 Jewish tourists, of which 3,000 are Israelis (and not as reported), and is a major Moroccan industry.

Coexistence projects such as the Essaouira festival are mainly for external consumption. The ethnographer Aomar Boum writes in Memories of Absence that the Jewish Museum in Casablanca  is almost unknown amongst Moroccans themselves.

Morocco has a strategic interest in projecting a positive image of Jewish-Muslim coexistence in order to gain US support for its claim to western Sahara. (It is the old antisemitic trope: Jews are thought to be behind US foreign policy). The mastermind behind this strategy is Andre Azoulay, who has been royal adviser on Jewish affairs since the 1990s. The Economist – and many other western media – are willing PR mouthpieces for the Moroccan government.

The Moroccan king has made a calculated risk to promote Jewish culture in the face of increasing threats to his regime from Moroccan Islamists. In Essaouira itself, an Israeli resident, Noam Nir, witnessed rising antisemitism.

But there is no avoiding the fact that the Jews, who in 1948 numbered 360,000, have now almost entirely disappeared from the country. The more Morocco promotes Jewish culture, the fewer Jews there are to enjoy it.

Like Loading...
Tags from the story
Antisemitism, Economist, Israel, Jewish refugees from Arab countries, Lyn Julius, Moroccan Jews, Morocco
Written By
Guest/Cross Post
More from Guest/Cross Post
This is cross-posted by David Solway at FrontPage, and represents an alternative theory, to...
Read More