BBC audiences got ample coverage of the US embassy story - but what were they told?

If the phrase ‘over the top’ comes to mind in relation to the volume of coverage of the US president’s announcement concerning Jerusalem and the US embassy in Israel that has appeared on the BBC News website, that is not surprising.

Between December 4th and the morning of December 7th inclusive, the website published the following reports: 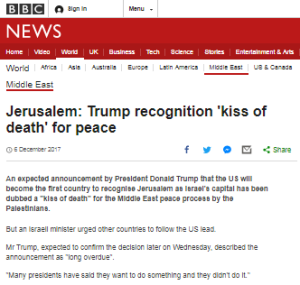 5) “US to recognise Jerusalem as Israel’s capital“

9) “Palestinians and Israelis on US Jerusalem recognition” – filmed

Clearly the language used in most of the headlines of those nine written articles portrays the US announcement as a negative development to audiences even before they have read the actual articles. A review of the content of those articles shows that their framing of the story is no less uniform.

In none of those nine written reports were readers given an accurate and comprehensive overview of the history behind the story. Accounts of Jerusalem’s history, when given, invariably begin in 1967 with some articles making a cursory but unexplained reference to Jordan’s occupation of parts of Jerusalem but no mention made whatsoever of the ethnic cleansing of Jews from parts of the city in 1948 or of the fact that Jerusalem is situated in the territory assigned by the League of Nations for the creation of a Jewish homeland.

Five of the nine written articles and one of the four filmed reports described certain neighbourhoods of Jerusalem as “settlements” and presented a partisan portrayal of “international law”. All but one of the nine written reports promoted partisan maps of Jerusalem produced by the political NGO B’tselem and – in one case – UN OCHA that include among other things portrayal of the Jewish Quarter in the Old City as a ‘settlement’. 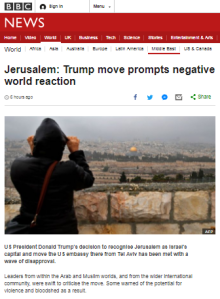 The majority of the written reports – seven – unquestioningly portrayed Jerusalem as being the “thorniest” issue in the Israeli-Palestinian conflict and eight of the nine, along with two of the filmed reports, told BBC audiences that the US announcement endangers or even destroys the ‘peace process’ – even though that process made no progress for the past 24 years, despite the US embassy being located in Tel Aviv.

None of the BBC’s reports informed readers that the Palestinians have previously been presented with peace offers that included considerable Israeli compromises on Jerusalem – which they refused.

All of the written reports gave copious amplification to condemnations of the US announcement by assorted parties with some even uncritically amplifying threats of violence as though that were a legitimate response. Any dissenting views presented came solely from Israeli politicians.

The sole mention of the fact that Russia recognised part of Jerusalem as Israel’s capital back in April was found in Lyse Doucet’s filmed report. An announcement relating to Jerusalem from the Czech Republic has at the time of writing not been covered by the BBC.

The essential context of the US’s ‘Jerusalem Embassy Act of 1995’ was provided to readers of just three of the nine written reports and subsequently added to one other many hours after initial publication. The context of the related June 2017 resolution passed by the US Senate was absent from all the BBC’s reports. Only two of the total thirteen reports mentioned that previous US presidents had made similar campaign promises to open an embassy in Jerusalem.

The BBC framed the US president’s announcement as being intended to appeal to specific sectors.

In article 5 readers were told that:

“Mr Trump would also direct the state department to begin the process of moving the US embassy to Jerusalem – but this could take several years as it still has to be designed and built and security concerns would need to be addressed.

He originally promised the move to pro-Israel voters during his campaign for the presidency.”

“The Republican Jewish Coalition have already thanked the president in a New York Times ad. The group is backed by Republican and Trump campaign mega-donor Sheldon Adelson.”

In article 11 readers were told that:

“Despite warnings of regional unrest over any such move, the decision fulfils a campaign promise and appeals to Mr Trump’s right-wing base.”

“…there’s far more evidence he [Trump] was simply focused on keeping a campaign promise to pro-Israel American Jews and evangelical Christians in his political base.”

“…this illustrates the political power of hardline Christian evangelicals who fervently support Israel.”

In fact, as noted by Michael Totten, the issue is far more bipartisan that the BBC would have its audiences believe.

“In 1995, the United States Congress, with an overwhelming bipartisan majority, passed a law declaring that “Jerusalem should be recognized as the capital of the State of Israel; and the United States Embassy in Israel should be established in Jerusalem no later than May 31, 1999.” This law, passed by a whopping 93-5 when Bill Clinton was president, had no effect whatsoever on the Camp David Peace Process which would have given East Jerusalem to the Palestinians as the capital of their sovereign state had Palestinian Authority Chairman Yasser Arafat said yes instead of no and chose peace rather than war.

That law was reaffirmed in the United States Senate just six months ago by a unanimous vote. Chuck Schumer, the Democratic Senate minority leader, co-sponsored the bill. And just two months ago, Schumer slammed Donald Trump for not keeping his campaign promise to recognize reality.”

As we see, BBC audiences got ample – but monochrome – coverage of this story over those three and a half days. While failing for the most part to provide essential context and refraining entirely from providing the relevant historical background necessary for understanding of the story, the coverage was uniformly focused on promotion of a partisan political narrative.