A BBC WS 'backgrounder' on the history of Jerusalem got the Western Wall - and more - wrong.

Like the BBC News website, BBC World Service radio produced a considerable amount of coverage concerning the US president’s December 6th announcement concerning Jerusalem and the US embassy in Israel even before that announcement had been made.

One of the many items broadcast to listeners around the world during that run-up time is of particular interest because it was presented to audiences as an academic account of Jerusalem’s history – and therefore by implication, both accurate and impartial.

The final item in the December 6th afternoon edition of ‘Newshour‘ was introduced by presenter James Coomarasamy (from 48:20 here) as follows: 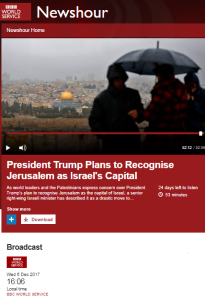 Coomarasamy: “We’re going to end the programme by returning to Jerusalem ahead of President Trump’s speech and a look at the history of the city and how it’s made it such a revered and contested place. Well Mick Dumper is a professor of Middle East politics at Exeter University here in the west of England. He says that Jerusalem’s status as a holy site for Jews, Muslims and Christians makes it highly prized.”

That portrayal of Mick (Michael) Dumper’s job title is indeed accurate. It does not however provide listeners with any insight into his “particular viewpoint” – as required under the BBC’s editorial guidelines on impartiality.

And so – unaware that Dumper has for example in the past proposed that UNESCO be the “guardian of Jerusalem’s holy sites“, collaborated with the anti-Israel NGO ‘Badil‘, described visits by Jews to Temple Mount as “settler encroachments” and claimed that Israel is “undermining…the Islamic presence” in Jerusalem – listeners heard him describe the Palestinian Authority as a “country”: a claim the BBC’s own style guide refutes.

Dumper: “It is the centre for the three major religions of the world; very central to Judaism, to Islam and to Christianity. But on top of that it’s then become the capital that both countries aspire to have as the central city of their country. And…eh…they can’t agree on it.”

Coomarasamy: “And in terms of the holy sites; just remind us what we’re talking about.”

Dumper: “For the Jews it’s what they call the Wailing Wall – or sometimes it’s known as the Western Wall – which is supposed to be the original wall of the Second Temple from the biblical period. For the Christians it’s the place where Jesus Christ was crucified and for the Muslims it’s the site where Mohammed was supposed to have ascended to heaven and receive some of the revelations for the Koran.”

Jews of course do not “call” the Western Wall “the Wailing Wall” – that term is a British invention. Neither is the Western Wall “the original wall of the Second Temple”, but part of the retaining wall of the plaza on which the Temple stood. Coomarasamy made no effort to correct those gross inaccuracies before continuing with a bizarre and context-free portrayal of the city’s division in 1948.

Coomarasamy: “And ever since the State of Israel was founded it’s been a divided city.”

Dumper: “Yes, I mean if I take you back a little bit to the period of the British mandate – that’s between 1917 and 1948 – it was the administrative capital of the territory known as Palestine which was a kind of quasi-colony of the British Empire. And Palestine was administered from Jerusalem. And after that in ’48 it was divided by the warring parties. The west side was occupied by Israel and the east side was occupied by the Jordanians and there was a line running through the middle.”

The British mandate of course did not take effect in 1917 but five years later and the assignment of the League of Nations Mandate for Palestine to British administration did not make the territory a “quasi-colony of the British Empire”. Coomarasamy made no effort to clarify to listeners that Jerusalem is located in the territory assigned by the League of Nations to the creation of a Jewish homeland and failed to challenge Dumper’s claim that Israel “occupied” – and by inference, still does – the western area of Jerusalem.

Coomarasamy: “And then there was the war of 1967 which changed the situation on the ground.”

Dumper: “Exactly. After 1967 Israel acquired the rest of Jerusalem and a wider area around the edge of Jerusalem and tried to incorporate it into Israel to try and make it as much Israeli as, say, Tel Aviv. But because of Palestinian resistance, because of long historical connections between that area of East Jerusalem and religious authorities – religious endowments and foundations – it was very difficult for Israel to impose itself. So there was this sort of grey area. East Jerusalem was not quite Israeli. It wasn’t treated exactly the same way as other areas that Israel had occupied in the West Bank and in the Gaza Strip. And the international community refused to accept any change in the status of Jerusalem prior to any negotiations.”

Coomarasamy: “And another change when the settler movement came to the fore as well.”

Dumper: “Yes, about ten years after Israel acquired the rest of East Jerusalem saw a change in the Israeli government between a more secular-minded Labour party and this was replaced with a Likud party which fostered and encouraged a widespread settlement movement which had a lot of religious foundations to it. And Jerusalem became very central to their thinking about what was the future of Israel.”

Failing to challenge Dumper’s inaccurate portrayal of the importance of Jerusalem across the Israeli political spectrum, Coomarsamy steered the subject of the discussion away from its professed subject matter.

Coomarasamy: “A lot of countries in the run-up to this much-anticipated announcement from President Trump are warning him against moving the embassy to Jerusalem. What sense do you have of how things might play out if he goes ahead with that move?”

Dumper: “By moving its embassy from Tel Aviv to Jerusalem the United States will be saying that they were no longer interested in a Palestinian state. Ten years ago I would have said there would be a huge reaction with, you know, flag burning in capitals of the region – Istanbul [sic], Cairo etcetera and, you know, a lot of attacks on Israeli embassies around the Arab world. I’m not absolutely sure that this will take place this time. It’s partly because the Arab world is so divided. The Palestinians themselves are very divided and sending out lots of different messages about how seriously they’ll respond to this. And the Islamic world is very divided between Shia and Sunni as well. So I think it’s a mistake what Trump is doing but I think he may have calculated that the response will not be as cataclysmic as it may have been…ah…ten years ago.”

In addition to its multiple inaccuracies, this ‘backgrounder’ obviously failed to inform listeners of the context to both the Jordanian occupation of Jerusalem following the War of Independence and the Jordanian decision to participate in the Six Day War. Listeners heard nothing of Jewish life in Jerusalem before the division of the city in 1948 and nothing of the ethnic cleansing of the Jewish population from areas including the Old City. The centrality and significance of Jerusalem to Jews and Israelis alike was not clarified in Dumper’s obviously politically motivated – and severely distorted – account of the city’s history.