A BBC report misled readers regarding the type of projectiles launched from the Gaza Strip.

As noted here last week, on December 9th the BBC News website produced the corporation’s first English language report of the year on the topic of missiles fired from the Gaza Strip – despite numerous other attacks having taken place throughout 2017.

After more attacks took place, the BBC News website produced another report on the same topic on December 14th – “Israel hits Hamas targets in Gaza after rocket fire” – in which readers were similarly informed that: 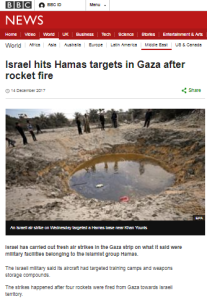 “There has been an escalation of hostilities since President Donald Trump gave US recognition to Jerusalem as the capital of Israel a week ago.”

Relating to incidents which took place the previous evening, the article opened:

“Israel has carried out fresh air strikes in the Gaza strip on what it said were military facilities belonging to the Islamist group Hamas.

The strikes happened after four rockets were fired from Gaza towards Israeli territory.”

Later on readers learned that:

“One rocket landed in a field in southern Israel, one reportedly fell short, landing inside the Gaza strip, while two were intercepted.”

However, BBC audiences were not told that the missile that fell short reportedly hit a school in Beit Hanoun in the northern Gaza Strip – which was fortunately empty at the time.

“Earlier on Wednesday night, four rockets were fired from Gaza at southern Israel. Two of them were intercepted by the Iron Dome missile defense system, a third struck an open field and the fourth fell short of the border and hit a school in the Gaza Strip, according to Israeli officials.

The rocket that fell short destroyed an empty classroom in Beit Hanoun’s Ghazi al-Shawa public school, according to the IDF.”

On December 15th yet another rocket fired by terror groups in the Gaza Strip fell short, also reportedly hitting a structure in Beit Hanoun.

“A rocket was fired at Israel from Gaza on Friday evening, yet hit a residential building in the Gazan town of Beit Hanoun, the Israeli army’s coordinator of government activities in the territories said. […]

According to the Coordinator of Government Activities in the Territories (COGAT), the house was significantly damaged. In a Facebook post in Arabic COGAT said that “once again terror organizations launch rockets at Gaza residents themselves.”

Despite the BBC being one of the few media outlets to have a permanent presence in the Gaza Strip, no mention of that shortfall missile appeared in the BBC News website’s December 15th report titled “Jerusalem: Palestinians killed in fresh clashes with Israel“.

In the first two versions of that report, readers were told that:

BBC Watch contacted the BBC News website, pointing out that the projectiles launched from the Gaza Strip throughout the past ten days were not “mortars”. The report was subsequently amended and that paragraph now reads as follows:

Remarkably, despite the recent uptick in missile fire from the Gaza Strip the BBC has not sent any of its Jerusalem-based correspondents to report from the Israeli communities affected by those attacks. As we see – and not for the first time – the corporation also continues to ignore residents of the Gaza Strip who fall victim to shortfall rockets fired by terror groups in the territory.

Why doesn’t the BBC tell audiences about Gaza’s shortfall missiles?