An 'impartial' BBC story promotes links to material produced by its protagonist's family.

It came as no surprise to find that on December 19th the BBC News website chose to promote two items – written and filmed – on its Middle East page concerning a member of an extended Palestinian family which has previously been featured in BBC content. 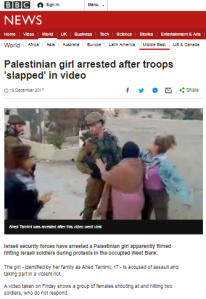 The filmed item – titled “Palestinian girl arrested after ‘slap’ video” – opens with footage marked “Courtesy Nariam Tamimi” who just happens to be the mother of that “Palestinian girl”. Viewers are told that:

“This is Ahed Tamimi and her cousin Noor with two Israeli soldiers. They are in the Palestinian village of Nabi Saleh during weekly protests. Three nights later 17-year-old Ahed was arrested. She’s accused of assault and taking part in violent riots. Just before the incident, the soldiers had been clashing with Palestinians around the Tamimis’ home who were protesting against the Israeli occupation and Donald Trump declaring Jerusalem as Israel’s capital.”

The next part of the footage is marked “Courtesy Bilal Tamimi” – who is Ahed Tamimi’s uncle.

“This video of Ahed Tamimi (in pink) went viral in 2015. She is a prominent child activist. She was trying to prevent her 12-year-old brother’s arrest for throwing rocks. She bit the Israeli soldier’s hand. Following that incident, she and her family met Palestinian Authority President Mahmoud Abbas.”

The video does not inform viewers that (despite the BBC’s effort to shoehorn the US president’s recent announcement on Jerusalem into the story) violent rioting has been taking place weekly in Nabi Saleh since December 2009. Neither does it clarify that Ahed Tamimi’s father Bassem is the main organiser of those Friday riots or that, together with other family members, he and his brother Bilal run a ‘news agency’ called ‘Tamimi Press’ which produces and distributes footage and images from those weekly riots, often featuring children from the Tamimi clan such as Ahed.

What this BBC video does do, however, is provide further PR for that particular Tamimi family business.

same amplification of the Tamimi clan’s videos at the top of the article. The report also promotes two separate links to posts from the Facebook account of Bassem Tamimi, in one of which he describes the IDF as a “terrorist and fascist army” and in the other makes claims which there is nothing to suggest have been independently verified by the BBC.

Another link promoted in the article leads to an article by Al Jazeera which includes comment from Bilal Tamimi’s wife Manal – who earlier this year was featured in two Al Jazeera puff pieces titled “How to be a Palestinian supermom” and “Motherhood and resistance in Palestine“. In addition, the report promotes two links to the Ynet website, one of which includes an interview with Bassem Tamimi.

To sum up, the BBC’s ‘reporting’ on this story promotes – twice – filmed footage for the most part produced by family members of the story’s main protagonist, two Facebook posts from her father, one article from a notoriously partisan and inaccurate media outlet quoting her aunt, one Ynet report quoting her father and a second Ynet report relating to a previous incident in which she was involved.

Let’s remind ourselves of the first of the public purposes laid out in the BBC’s Charter:

“The BBC will provide accurate and impartial news, current affairs and factual programming of the highest editorial standards so that all audiences can engage fully with issues across the UK and the world.” [emphasis added]

“We must take special care over how we use any material that we suspect has been supplied by a member of a lobby group or organisation with a vested interest in the story, rather than a disinterested bystander. […]

Material supplied by third parties needs to be treated with appropriate caution, taking account of the reputation of the source. […]

We should only broadcast material from third parties who may have a personal or professional interest in its subject matter if there is a clear editorial justification.”

“Where BBC online sites covering ‘controversial subjects’ offer links to external sites, we should ensure that the information on those external sites, taken together, represents a reasonable range of views about the subject.”

Obviously the BBC cannot claim to have adhered to “the highest editorial standards” in these two reports that do little more than significantly – and unquestioningly – extend the outreach of the Tamimi family’s child exploiting propaganda.

Bulk of a BBC report is a B’Tselem press release