A complaint from BBC Watch prompted amendment of terminology that breaches the BBC's own style guide.

Late last month we noted the use of terminology that breaches the BBC’s own style guide in the synopsis to a music programme aired on BBC Radio 4.

Although the BBC Academy’s “journalists’ guide to facts and terminology” states “in day-to-day coverage of the Middle East you should not affix the name ‘Palestine’ to Gaza or the West Bank”, BBC audiences were told that: 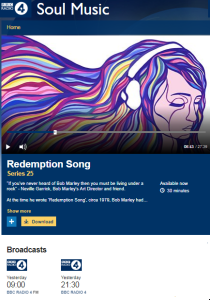 “For Grammy Award Winning artist John Legend, it’s become an anthem for addressing the criminal justice system of America whilst in Palestine, for ‘Musicians without Borders’ practitioner Ahmed al ‘Azzeh it’s a song that inspires him to work towards a better life.” [emphasis added]

BBC Watch submitted a complaint on that point and received a response including the following:

“Thank you for contacting us regarding Radio 4’s ‘Soul Music’.

I understand you were unhappy with the use of the word ‘Palestine’ in the synopsis for the 27 December episode on the programme’s section of our website.

Having consulted with the programme’s production team and senior editorial staff at BBC Radio 4, we have now amended this to ‘Palestinian Territories’.

We would like to thank you for brining [sic] this to our attention.”

The amended part of the synopsis now reads:

“‘Musicians without Borders’ practitioner Ahmed al ‘Azzeh finds the song inspires him to work towards a better life in the Palestinian Territories.”