As Hamas-Fatah 'reconciliation' faltered, so did BBC reporting.

Between mid-September and the beginning of November 2017 the BBC produced numerous reports on the topic of a Hamas-Fatah ‘reconciliation’ which was supposed to put the Palestinian Authority back in charge of the Gaza Strip ten years after the Hamas coup. 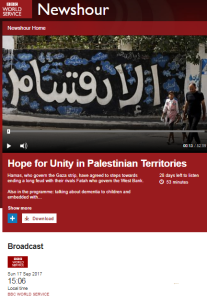 BBC adds superfluous punctuation to US and Israeli statements on Hamas

However, as that ‘reconciliation’ began to falter, so did BBC coverage and so audiences were not informed that the deal it had so generously reported failed to immediately solve an issue which was also the subject of many BBC reports – the electricity crisis in the Gaza Strip.

Gaza’s electricity crisis continues but BBC reporting does not

Another crisis related to that failed ‘reconciliation’ has recently emerged in the Gaza Strip – as Ha’aretz reports.

“The cleaning and maintenance staff at Gaza’s hospitals went on strike Sunday until further notice to protest the nonpayment of wages.

The 830 people involved work via manpower contractors, but the Health Ministry in Ramallah has failed to pay its share of their salaries for four months. The ministry accuses Hamas of failing to hand over full control over the Strip, a charge Hamas denies. […]

In January the cleaners struck for a few days but returned after receiving part of the money owed them.

At the end of last week, a Hamas delegation headed by Ismail Haniyeh spoke with Egyptian intelligence officials in Cairo. The Egyptians hope to help the Palestinians resolve the Palestinian Authority-Hamas rift, with the aim of resolving Gaza’s humanitarian crisis.”

The Times of Israel adds:

“Shifa Hospital, the largest medical complex in the Gaza Strip, announced on Sunday that it was suspending all surgeries, with the exception of emergency cases, due to a cleaners’ strike over unpaid salaries.

“It has been decided to postpone all scheduled surgeries, including those for patients with tumors,” the hospital said, noting that the decision excluded “life-saving cases.” […]

Last month, the cleaners agreed to return to work after the Palestinian Authority government promised to pay them their salaries. However, the government has since paid salaries for only two months, prompting the cleaners to renew their strike.

Hamas officials have accused the PA government of failing to provide funds to the health system in the Gaza Strip despite a Hamas-Fatah “reconciliation” agreement signed in Cairo in 2017. According to the officials, many hospitals are suffering from a severe shortage in medicine and generator fuel as a result of the PA’s failure to carry out its duties.”

Notably the BBC – which only last month aired a programme in which a Hamas official was allowed to promote the inaccurate yet unchallenged claim that the problems plaguing medical services in the Gaza Strip are exclusively the result of Israel’s counter-terrorism measures – has not found this particular story about Gaza’s medical services newsworthy.