BBC misses another opportunity to inform of Palestinian social issues.

As has been noted here in the past, BBC coverage of internal Palestinian affairs is typically decidedly sparse.

“…the BBC’s one of the few organisations that has permanent offices in Gaza, in Ramallah, in Jerusalem, so we are better placed than many to make sure that we report both sides of the story.”

The BBC’s interpretation of what “the story” is about is however very limited and its coverage focuses overwhelmingly on the Palestinian-Israeli conflict. Although the conflict is clearly just one story among many in the region, only very occasionally do audiences see stand-alone reports about Palestinian affairs which are not framed within that context and do not have an Israel-related component.

Throughout the whole of 2017 (see ‘related articles’ below) the BBC News website published a total of twenty-eight articles relating to Palestinian affairs. In contrast, Israeli affairs were the topic of eighty-two BBC reports.

Six of the 28 reports related to the topic of the chronic electricity shortages in the Gaza Strip:

Four of the reports related to Hamas’ leadership and policy document:

How much of a shift is the new Hamas policy document? Yolande Knell, discussed here

Two articles reported on executions carried out by Hamas:

One reported related to the economic situation in the Gaza Strip:

Three reports related to social stories from the Gaza Strip:

Palestinians ‘could freeze US ties’ over Washington office closure

One report related to PA censorship:

Six reports related to the Hamas-Fatah unity deal which did not transpire:

On February 19th 2018 what appeared at first glance to be a rare report on a Palestinian social issue appeared on the BBC News website’s Middle East page under the headline “Gaza women’s TV channel blocked by Hamas” and an Arabic language version of the report was posted on the BBC Arabic website. 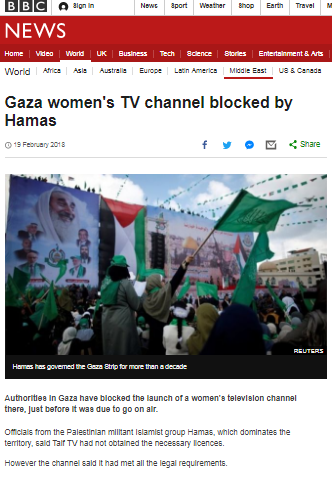 “Authorities in Gaza have blocked the launch of a women’s television channel there, just before it was due to go on air.

Officials from the Palestinian militant Islamist group Hamas, which dominates the territory, said Taif TV had not obtained the necessary licences.

However the channel said it had met all the legal requirements.”

The vast majority of the article’s word-count (78%) was devoted to quoting claims and counter-claims regarding the TV channel’s licence.

Notably – in contrast, for example, to the Times of Israel report on the same story – the BBC’s article did not inform readers of angry reactions to the Hamas decision from members of the Palestinian public.

Although the BBC chose to raise the subject of women’s rights in the Gaza Strip in this report, it devoted remarkably little of its word-count to that topic.

“Civil liberties groups have long criticised Hamas for what they say is a poor record on women’s rights in Gaza.” […]

“Hamas has long been accused of discriminating against women since it reinforced its hold on power in Gaza after ousting its secular Fatah rivals in 2007.”

That link leads to a report by Freedom House in which just one of the thirty-nine paragraphs gives a very brief and generalised portrayal of the situation of women in the Gaza Strip.

In other words, once again the BBC has failed to make the most of an opportunity to provide audiences with meaningful insight into social issues within Palestinian society.