Another BBC journalist is unable to grasp that there is more than one set of events going on at the same time in Syria.

On February 22nd an article by the BBC’s Arab affairs editor Sebastian Usher appeared in the ‘features’ section of the BBC News website’s Middle East page under the title “Syria conflict: Will powers end up in direct war?“. 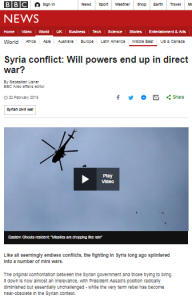 Although the article is tagged ‘Syrian civil war’ – a conflict in which Israel is not involved – readers find the following statement:

“To the south, Israel has sat out most of the conflict, loath to be drawn in – to the disastrous extent that it was during the 16 years of the civil war in Syria’s neighbour, Lebanon. It has mostly limited itself to targeted attacks on alleged Iranian bases and suspected Hezbollah arms supplies.” [emphasis added]

Apparently the BBC’s Arab affairs editor would have his readers believe that Israel carries out strikes on the strength of allegations and suspicion. Notably, Usher’s claim of Israeli involvement in the Lebanese civil war omits all mention of the frequent attacks against Israel launched by the PLO from Lebanese territory – attacks which sparked Operation Litani in 1978 (three years after the civil war began) and Operation Peace for Galilee in 1982.

Later on Usher tells readers that as the Syrian civil war progressed:

“Israel saw battle-hardened Hezbollah and Iranian fighters move closer and closer to its border – prompting a more active, though still cautious, engagement in the conflict.”

That claim once again inaccurately suggests that Israel has been ‘engaged’ in the Syrian civil war.

“But the increasing international commitment on its various battlefields runs the risk of shifting it from a war between proxies to one directly between the powers pulling the strings. And that is a highly dangerous development.

Recent events have shown that the limited comfort that those involved will always pull back from the brink of deeper confrontation, may not be entirely reliable.

An Israeli fighter jet was shot down over Israel by a Syrian missile, following the interception of an Iranian drone in Israeli airspace as part of a ratcheting up of tensions in the hitherto quieter south of Syria.”

Usher closes his article with the claim that:

“If nothing else, all this may only prolong the Syria war. But it raises fears of all-out confrontation between the outside players – all of whose interests remain as fundamentally opposed as they have been at any time in the conflict.”

Once again, Usher is implying that Israel is a ‘player’ in that war.

This is far from the first time that the BBC has promoted the erroneous notion that Israel is involved in the Syrian civil war: it has been doing so since 2013. The corporation’s journalists appear to be incapable of understanding that Israeli strikes on Iranian weapons bound for Hizballah or Israeli responses to cross-border fire from Syria do not make Israel a ‘player’ in the Syrian civil war but are in fact related to the Iranian and Hizballah aggression against Israel that long predates that conflict.

As we see, even the BBC’s Arab affairs editor is unable to grasp that there is more than one set of events going on at the same time and to distinguish between the separate topics of the war in Syria and actions that are exclusively linked to the protection of Israel’s citizens. Notably too, Sebastian Usher’s analysis did not include any mention of the humanitarian and medical aid supplied to Syrians by Israel.