In part one of this post we looked at the first half of a programme in the ‘Our World’ series that was recently broadcast on the BBC News Channel and the BBC World News Channel under the title “Working for the Enemy”. 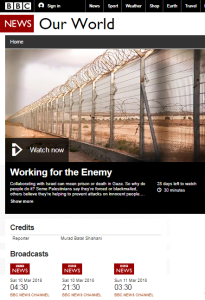 After presenter Murad Batal Shishani had uncritically amplified Hamas’ claim that Israel was behind the assassination of one of its senior operatives last year and had been given access to a Hamas-run prison to interview a contrite collaborator, he turned to the topic of the alleged recruitment of Mazen Fuqaha’s assassin by Israel.

Shishani: “But would the Israeli security forces really recruit a jihadi – someone dedicated to the violent destruction of Israel? It seemed an extraordinary risk”.

Shishani then went to interview the former Shin Bet director and current member of the Knesset Avi Dichter, asking him:

Shishani: “Would you recruit a jihadist to kill a Hamas operative?”

Dichter: “Well everything is possible in this fight against terrorists.”

Shishani quickly moved on to his next interviewee who he described as “a reserve officer from Israeli military intelligence”. The fact that the interviewee remained anonymous and his voice unheard, together with Shishani’s claim that “he has to be careful about what he says in order to avoid arrest”, raises the unanswered question of how BBC Arabic made contact with this particular interviewee and whether or not a ‘middle-man’ such as the political NGO ‘Breaking the Silence’ was involved.

That interviewee – presented as Aaron – apparently gave Shishani the money quotes he was obviously looking for.

Voiceover: “We know so much about people’s personal lives. Their romantic affairs, their sexual affairs, their health problems, everything. So if you want to gain cooperation from people it’s obviously best if we can blackmail this person.” […]

Voiceover: “If someone’s daughter has cancer, for example, and he wants to get treatment in one of the Israeli hospitals – which is no doubt better treatment than in Palestinian hospitals – and if we know about it, maybe we can stop him and tell him OK you can have this but only if you cooperate.”

That led Shishani conveniently on to his next story.

Shishani: “Salwa Saidni [phonetic] knows all about this coercion. Today she is with her grandchildren. A year ago their mother Kholoud needed urgent treatment for cancer. The Israeli authorities granted her permission to go to a hospital in Jerusalem. It was six o’clock and barely light when Salwa and her daughter Kholoud arrived here at the Erez Crossing one morning in January 2017. […] The officers wanted information about a man married to Kholoud’s cousin. She said he was an olive tree farmer.”

Shishani: “Salwa says her daughter was not able to give any information about the man.”

Salwa: “He told her ‘there’s the bus you need’. Only a glass screen separated us from it.”

Shishani: “But the Israeli authorities did not allow Kholoud to board the bus. […] Three weeks later Kholoud died.”

After having given extensive amplification to allegations that have been used by anti-Israel activists to delegitimise Israel – and with nothing to suggest any independent verification by the BBC – Shishani once again ostensibly ticked the BBC’s impartiality box with a one-liner. 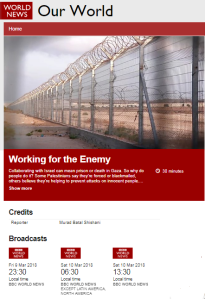 Shishani: “The Israeli authorities told us that entry to Israel is not conditional on providing information or cooperation and they denied any irregularities in their dealings with Kholoud.”

Notably, Shishani made no effort to inform BBC audiences that the party responsible for medical services in the Gaza Strip is the Palestinian Authority and it is that body which in 2017 exacerbated the chronic crisis affecting  the healthcare system in Gaza by severely cutting medical aid and referrals for treatment in Israel.

Shishani’s next interviewee was presented as follows:

Shishani: “Some Palestinians work with Israel because they genuinely believe this is the right way to protect their own people. I have come to a tiny village in the far south of Israel. It is the home of a Bedouin community of around 20 families that were moved from Gaza, where they had devoted their lives to working with the Israeli state. […] Hassan is the community leader here – a role he inherited from his father, a Bedouin Sheikh from the Sinai desert. Hassan’s father sided with the Israeli state after Arab nations were defeated in the 1967 war and Israel occupied his land. […] How do you feel when you or your father are called a traitor or a spy?”

The programme’s last interview – once again anonymous – took place in “a provincial Israeli town” with a man described as having “worked in Gaza for the Israelis from the age of 17 – but that was before he had to get out.”

Unsurprisingly, Shishani’s final interviewee stated that “my past is haunting me” and Shishani then closed the report.

Shishani: “Normality, more than anything, is what people in Gaza crave but for most here, it’s out of reach. Constant scrutiny, suspicion and human need mean that collaboration will keep shaping and poisoning lives and some will continue to work for the enemy.”

Clearly Murad Batal Shishani had a specific story to tell in this programme and nothing was going to get in its way. His uncritical amplification of the stories and interviews – in part obviously Hamas approved – that make up the bulk of the programme was not balanced by his token interview with Avi Dichter or his tepid one-liner presentations of responses from “the Israeli authorities”.

For years Hamas has periodically run campaigns targeting ‘collaborators’ and its extra-judicial executions of people branded as such are a subject only rarely covered by the BBC. Given the cooperation from Hamas that Shishani obviously enjoyed in the making of this programme, it is hardly surprising to see that Hamas’ use of the ‘collaborator’ tag as an excuse for extrajudicial executions did not get any coverage whatsoever in Shishani’s one-sided report.

BBC Watch secures another correction to a BBC Arabic article

A Gaza border closure not deemed newsworthy by BBC News