On the morning of March 31st the BBC News website report published a report that was originally titled “Gaza-Israel border: UN seeks investigation over protest deaths”. Some seven hours afterwards that headline was changed to “Gaza-Israel border: Palestinians mourn border dead” and, like many versions of an article on the same topic that preceded it, the report refrained from informing BBC audiences that the mass protest on the Gaza border, which on March 30th included numerous violent incidents, was initiated and organised by Hamas and additional terror factions in the Gaza Strip. 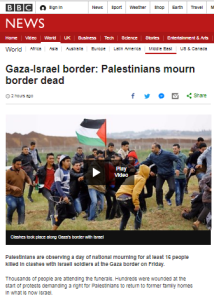 Rather, BBC audiences were steered towards the view that this was some kind of spontaneous protest:

“Protesters are returning to a tent city put up near the border in preparation for the demonstration to resume, said AFP news agency. Palestinians have also called a general strike.

Thousands of Palestinians marched to the border at the start of a six-week protest, dubbed the Great March of Return. […]

Palestinians have pitched five camps near the border for the protest, from Beit Hanoun in the north to Rafah near the Egyptian border.”

The BBC’s explanation of the purpose of the six-week stunt was as follows:

“Hundreds were wounded at the start of protests demanding a right for Palestinians to return to former family homes in what is now Israel. […]

The aim of the protest is to assert what Palestinians regard as their right to return to towns and villages from which their families fled, or were driven out, when the state of Israel was created in 1948.”

As in the previous report, no effort was made to inform readers that the Palestinian demand for ‘right of return’ is at odds with the two-state solution or that – as noted by David Horovitz – its aim is to threaten the existence of Israel as the Jewish state.

“Organizing and encouraging mass demonstrations at the border in the so-called “March of Return” to face off against Israeli troops, while sanctimoniously and disingenuously branding the campaign non-violent, is merely the latest iteration of Hamas’s cynical use of Gazans as the human shields for its aggression.

Just in case anybody forgot, demanding a “right of return” to Israel for tens of thousands of Palestinian refugees and their millions of descendants is nothing less than a call for the destruction of Israel by demographic means. No Israeli government could accept this demand, since it would spell the end of Israel as a Jewish-majority state. Israel’s position is that Palestinian refugees and their descendants would become citizens of a Palestinian state at the culmination of the peace process, just as Jews who fled or were forced out of Middle Eastern countries by hostile governments became citizens of Israel.”

Neither did the BBC bother to inform its audiences that the basis for that demand is a non-binding UN GA resolution dating from December 1948 that was opposed at the time by Arab states and which (despite long-standing BBC claims to that effect) does not specifically relate to Palestinian refugees and – contrary to often heard assertions – does not grant any unconditional ‘right of return’. Rather, it recommends that refugees be allowed to return to their homeland if they wish to “live at peace with their neighbours”.

“The UN Security Council condemned the violence after an emergency session.

Readers were not informed that the UNSC “emergency session” was called by Kuwait (which expelled most of its Palestinian residents in 1991) or that:

“The Security Council meeting was initially held behind closed doors, but it was later moved to an open hearing after it became clear the 15-member body could not agree on a statement condemning the clashes.”

In fact, contrary to the impression given by the BBC, no resolution was issued by the UNSC.

The article closed by telling BBC audiences that:

Riyad Mansour is of course not “[t]he UN envoy for Palestine”: he is a Palestinian envoy to the UN who holds the title “Permanent Observer of Palestine”. BBC Watch has requested a correction to that inaccuracy.

Over twelve hours after its original appearance the article’s headline was amended yet again. The two later versions of the article titled “Gaza-Israel violence: Israel warns of action inside Gaza” included information about the identity of some of the people killed during the previous day’s rioting.

The BBC, however, was apparently unable to find the Hamas statement concerning five members of its Izz a-Din al-Qassam Brigades for itself and instead resorted to citing second-hand news. Despite having reported the previous day that Omar Samour was described by the IDF as having been engaged in “suspicious activity” near the border fence, the BBC failed to provide that information in this report.

The BBC did not bother to inform its audiences that at least ten of the sixteen people killed during the violent incidents on March 30th were identified as members of terror groups and later on in the article readers were told that:

“Although most protesters stayed in the encampments, some groups of youths ignored organisers’ calls to stay away from the fence and headed closer to Israeli positions.” [emphasis added]

The BBC also continued to avoid telling audiences in its own words that Hamas and additional terror factions initiated and organised the ‘protests’.

“Brig Gen Ronen Manelis told journalists that Hamas – the militant group that controls Gaza – was using Palestinian protests as a cover for launching attacks on Israel. […]

“If it continues, we shall have no choice but to respond inside the Gaza Strip against terrorist targets which we understand to be behind these events,” he said according to AFP news agency.”

Obviously BBC audiences will not be able to understand this story fully if they are not informed by the BBC in its own words that this stunt was initiated organised by Hamas and additional terror factions in the Gaza Strip and if they are not given the full picture regarding the motivation behind Palestinian demands for the so-called ‘right of return’. To date, after three days of reporting on this story, the BBC has failed to provide that essential information.

BACKGROUNDER: The Palestinian Claim to a “Right of Return”  (CAMERA)