The April 19th edition of BBC Radio 4’s ‘World at One’ – presented by Sarah Montague – included an item (from 33:34 here) that used Israel’s 70th Independence Day celebrations as a hook on which to hang the promotion of a political narrative and a campaign. 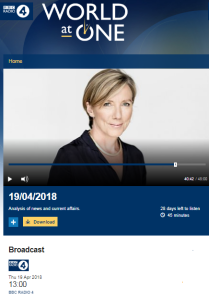 Montague began by inaccurately claiming that the day of the broadcast was the day upon which Israel was founded according to the Hebrew calendar. In fact, the date of Israel’s Declaration of Independence is the 5th of Iyar, which this year fell on Friday, April 20th.

Montague: “In the Hebrew calendar it was 70 years ago today that Israel was first founded. To mark the establishment of the Jewish state there will be 70 hours of celebrations in the country. Going by the Western calendar, the date of independence was May the 14th in 1948 and as in every year since then, Palestinians will mark that same event, which they call ‘al Nakba’ – the day of catastrophe – as a time of mourning and anger. Our correspondent Caroline Wyatt’s been looking back to 1948 and talking to a Palestinian writer and an Israeli Rabbi who both live in the UK about what the creation of Israel means to them today.”

Caroline Wyatt found it appropriate to open her item began with an archive newsreel recording in which the founders of the Jewish state were portrayed as “lawless” and “thugs”. She apparently failed to recognise the irony of a newsreel that described the same British authorities which had actively prevented Jews in both the pre and post-war eras from reaching safety in Mandate Palestine as the representatives of “law and order”.

Archive recording: “Against a background which daily gains resemblance to war-scarred Europe, Palestine is now gripped with almost unrestricted racial warfare. With British influence waning and United Nations actions still delayed, the lawless elements of Jew and Arab populations take over from the servants of a policy of law and order.”

Wyatt: “This was the drama of Palestine as Pathé News headlined its war report in January 1948. It was the year after the newly formed United Nations accepted the idea of partitioning Palestine. One zone for the Jews, to be known as Israel, and the other zone for the Arabs who formed the majority of the population there at the time. It was a plan accepted by the Jewish Agency for Palestine but rejected by Arab leaders, so the fighting continued.”

Archive recording: “In the back streets of Tel Aviv, Jerusalem and Jaffa the thugs of both sides build up the armoured cars for war against each other. In between them – victims of the struggle – stand the great majorities of civil people on both sides.”

Wyatt: “The last of the British soldiers that had been there under the British mandate that administered Palestine for a quarter of a century withdrew from the region on May the 14th 1948 – the day before the mandate was due to expire.”

Listeners then heard an archive recording of Ben Gurion preparing to read out the declaration of independence – an event which Wyatt inaccurately claimed took place “at midnight” when in fact it took place at 4 p.m. so as not to run into Shabbat.

Wyatt: “At midnight that same day David Ben Gurion, the chairman of the Jewish Agency for Palestine, declared the State of Israel. For many Jews it was the culmination of over two thousand years of hope – and the beginning of 70 years of struggle of the Palestinian people. Professor Eugene Rogan is the director of St Antony’s College Middle East Centre at Oxford University.”

BBC audiences are of course familiar with the style of commentary on the Middle East advanced by Eugene Rogan but nevertheless his promotion of the falsehood that there had been an entity called the “State of Palestine” before May 14th 1948 is remarkable.

Rogan: “The founding of Israel meant very different things to the different stakeholders in the Middle East. For partisans of the Zionist movement it was the realisation of a generation’s old aspiration: to establish a statehood for the Jewish people. Coming in the aftermath of the Holocaust, it seemed to vindicate the greatest of hopes at a time when the Jewish people had suffered their worst of catastrophes. But of course for the Palestinian Arab people, the creation of the State of Israel came at the expense of their homeland: the State of Palestine as it had been ruled under British mandate since 1920. And so for them, rather than this being a moment of joy or triumph, it was a moment of their catastrophe and they’ve called it that ever since. They refer to it as the Nakba – the Arabic word for catastrophe.”

Listeners next heard from another academic who has also been a BBC contributor in the past and whose resume includes having been an advisor to Yasser Arafat – although that was not clarified.

Khalidi: “I’m Ahmad Samih Khalidi. I come from an ancient Jerusalemite Arab family. I was born and lived in exile. I am a writer and commentator. Currently I’m associated with St Anthony’s College at Oxford. I am myself a product of the Nakba. I was born in 1948 and my whole life of course has been determined by this experience, as has that of all my contemporaries, my family and everyone, really, who I relate to on a daily basis.”

Wyatt: “Ahmad Khalidi has spent much of his adult life involved in trying to help find a peaceful resolution for this one land claimed by two peoples.”

Khalidi: “This was an entity that had taken over my homeland, dispossessed my people, so there was an ongoing struggle and Israel was seen as an aggressive state that had dispossessed the people of Palestine and was bent on expanding its presence in the region. Later as I grew up it became more apparent to me that this was something that I personally had to do something about.”

After an ostensibly ‘neutral’ academic and a Palestinian voice, Wyatt introduced her ‘balance’ – an American-born, UK resident interviewee who has a “complex” relationship with Israel.

Wyatt: “So what about those for whom Israel has been a refuge? In north London I go to a deli – Falafel Feast – to meet an Orthodox Rabbi, Natan Levy, who’s known in the UK for fasting over Ramadan – an attempt to bring about greater understanding between Muslims and Jews. He says his relationship with Israel has long been a complex one.”

Levy: “When I was growing up in America we had family members that had the trauma – not just the history – but the trauma of the Holocaust was really real. My mum had a bag packed for us; each of the children had a bag packed at the front door. Just in case something should go horribly wrong we could grab our bags and our passports and run to Israel, the Holy Land, that was always seen – even before I’d ever been there – as the place of safety. We all have Israeli passports and my oldest daughter was born there.”

Wyatt: “Yet Natan Levy’s attitude towards Israel has changed over time.”

Levy: “So for my yeshiva – the place where I learned to be a Rabbi – was actually in the West Bank. There I guess you would say I was a settler with the ideologies that went along with being a settler. This land is all ours, promised in the Torah – in the Old Testament – and slowly I came to realise; we were on top of the hill and at the bottom of the hill was a Palestinian farm that had also been there for generation upon generation. And bit by bit it seemed like everyone was in a sort of prison. Everyone was kept separate. The fences were too big and eventually we began a bit of conversation with the people at the bottom and their story, like ours, was filled with longing and hope and deep trauma. And the more I spoke to them, the harder it was to justify being on top of the hill and having a fence between us.”

Levy studied at a yeshiva in Gush Etzion – an area in which Jews had purchased land and built communities years before the arrival of the British-backed invading Jordanian army in 1948. Radio 4 listeners were of course not informed of those narrative-spoiling facts and similarly Wyatt did not bother to clarify the role of Palestinian terror in her portrayal of ‘growing fences’.

Wyatt: “Over the years the fences in Israel have grown, while hopes of a deeper dialogue on peace have withered. Ahmed Khalidi describes himself now as deeply pessimistic about the prospects.”

The item ended with that unchallenged and unquestioned promotion from ‘one-stater’ Ahmad Khalidi and no clarification was provided to BBC audiences to explain that what the Oxford academic is in fact touting is the demise of the Jewish state.

And not only did BBC Radio 4 find it appropriate to provide a stage for promotion of the campaign to end to Jewish self-determination on the very day that it was being celebrated, but the same item was also broadcast to BBC World Service listeners (from 45:05 here) in the afternoon edition of ‘Newshour’ on the same day.