The BBC's funding public gets a dose of politically partisan messaging with sports news.

On May 3rd a report by BBC Sport correspondent Tom Fordyce concerning the Giro d’Italia cycling race was published on the BBC News website’s Middle East page as well as on the BBC Sport website. 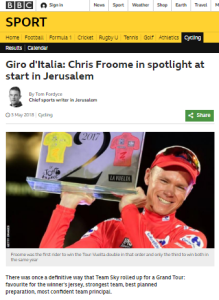 Titled “Giro d’Italia: Chris Froome in spotlight at start in Jerusalem“, the report included amplification of statements made in a press release put out by an NGO with a long record of anti-Israel campaigning that is frequently uncritically quoted and promoted by the BBC.

“Others see little more than a concerted effort to present an image of Israel to the world at odds with the reality. Amnesty International has accused Israel of trying to “sportwash” its reputation, as protests continue in the Gaza Strip that have so far led to the death of 35 Palestinian protestors.”

Obviously the ‘Great Return March’ events which Hamas and other terror groups have been staging weekly since the end of March have nothing whatsoever to do with the cycling race that is ostensibly the topic of this report but Fordyce nevertheless chose to amplify Amnesty International’s opportunistic false linkage and delegitimisation.

Yolande Knell’s promotion of the Old City of Jerusalem as “occupied territory” predictably fails to inform visitors to the BBC Sport website of the all-important context of the internationally rejected belligerent Jordanian occupation of that district and additional parts of Jerusalem. And so, once again, the BBC’s funding public got a dose of politically partisan messaging with its ‘news’.