Tonight and tomorrow Israel celebrates the reunification of Jerusalem on the 28th of Iyyar 5727 (June 7th 1967), nineteen years after the Jordanian occupation and the expulsion of Jews from neighbourhoods including the Old City.

“Batei Mahse (“Shelter for the Needy” in Hebrew) was the first neighborhood built by Jews in the modern era. Over the years, additional houses were built by philanthropists in Batei Mahse, among them the magnificent Rothschild House.

In the first half of the 18th century, the Old City of Jerusalem’s Jewish population lived in conditions of dire poverty. Few Jews owned land, and most had to rent their apartments from Muslims. In 1857, the opportunity arose to purchase a large plot of land in the southeast of the Jewish Quarter and build on it. This land was purchased by Kolel Hod, an organization of Dutch and German Jews (Hod being an abbreviation of Holland and Deutschland) that administered the funds collected in these countries for the benefit of Dutch and German Jews living in the Land of Israel. Their aim was to build modern apartments in order to relieve the crowdedness of the cramped Jewish Quarter. For the first time in many generations, Jews were able to build their own housing.

During the battles that raged in the Jewish Quarter as part of Israel’s War of Independence in 1948, the apartments and cellars of Batei Mahse provided shelter for the Jewish civilian population remaining in the besieged Quarter. Following the surrender to the Arab Legion, the defenders and residents of the Jewish Quarter gathered in Batei Mahse. Thirty fighters still standing after thirteen successive days of battle, along with fifty wounded and 260 civilians aged 13 to 78, were taken into captivity. 1,300 residents of the Jewish Quarter – women, children and the elderly – were forced to leave their homes, which were looted and set on fire. Approximately 1,300 years after the Arabs had allowed the Jews to return to Jerusalem with the end of the Byzantine Empire’s rule, the Jews were once again expelled from within Jerusalem’s walls.”

“After the Six-Day War of 1967, in which eastern Jerusalem was retaken by Israel and the city was reunited, the wreckage in Batei Mahse was cleared away. The square was enlarged and now serves as an open playground for two nearby primary schools – one in the Rothschild House and the other in buildings slightly to the south, some of which are original buildings from before the War of Independence.” 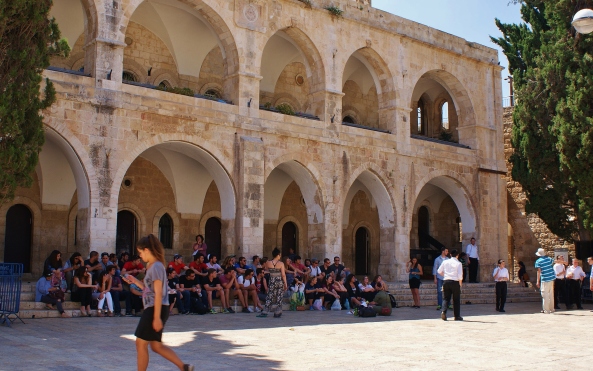 As readers are no doubt aware, the BBC continues to promote the politicised narrative according to which the Batei Mahse buildings and the rest of the Jewish Quarter in the Old City of Jerusalem are an illegal “settlement”.