BBC World Service audiences heard one specific narrative on the topic of the US decision to move its embassy to Jerusalem.

The May 14th afternoon edition of the BBC World Service radio programme ‘Newshour‘ – presented by Razia Iqbal – included a pre-recorded interview (from 16:05 here) with regular BBC guest Mustafa Barghouti in which many of the themes already apparent at the beginning of the programme (discussed in part one of this post) were repeated and reinforced. 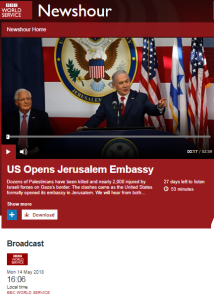 Iqbal: “Let’s hear now from the Palestinians. Mustafa Barghouti is a member of the Palestinian Legislative Council. He also sits on the central council of the Palestine Liberation Organisation. A short while ago I spoke to him from our Ramallah studio. He gave me his reaction to the opening of the US embassy in Jerusalem.”

Barghouti: “This move from the side of the administration of President Trump is very bad and I think it makes the United States complicit and even participant in violating international law and actually committing a war crime by approving the annexation of occupied territories by force. It also destroys the ability of the United States to be a negotiator in any peace process.” […]

Iqbal: “Let’s start with that first point that you made – that the US is in violation of international law. President Trump would argue that the peace process was moribund and by taking Jerusalem off the table, he has a plan to reinject life into a process that was dead.”

Barghouti: “No, he is substituting the peace between two sides with…and enforcing a deal unilaterally with Israel on the Palestinian side, consolidating the occupation and the system of apartheid and racial discrimination. He’s taking off the table the issue of Jerusalem, the issue of settlements, the issue of refugees. So practically he’s saying I’m fulfilling what the Israelis want.”

Listeners heard no challenge to Barghouti’s ‘apartheid’ smear from Razia Iqbal, who went on to ask a ‘question’ which is obviously irrelevant given that Israel’s position on its capital has not changed in thirty-eight years and merely served as a cue for more of Barghouti’s deliberately delegitimising falsehoods and smears.

Iqbal: “A third of the residents of Jerusalem are Palestinians. Given what Prime Minister Netanyahu has been saying about Jerusalem being the undivided capital of Israel, what do you think is going to happen to those Palestinians now.”

Barghouti: “Well they are treated as third grade citizens. They are discriminated against. There is one law for Israelis and another for Palestinians. Their properties are confiscated. They are prohibited from building new homes. In reality, Mr Netanyahu is trying to push the Palestinians out of Jerusalem and trying to exercise ethnic cleansing against the Palestinian people.”

Razia Iqbal could have put Barghouti’s allegations of ethnic cleansing into proportion had she told listeners that the Arab population of Jerusalem grew from 69,000 (26%) in 1967 to 324,000 (37%) in 2015. She chose not to do so. Listeners then got an insight into the source of Iqbal’s earlier claim that “many people” think that “the United States is joining the occupier in violating international law”.

Iqbal: “How are the Palestinians going to respond in the context of what you regard as a violation of international law? If you’re saying that the US is now siding with the occupying power, what is it that you can do about the United States breaking those resolutions at the United Nations?”

Barghouti responded with promotion of the BDS campaign – which as usual was not explained to audiences. Later on he was given another opportunity to promote the ‘apartheid’ smear unchallenged.

Iqbal: “The United States is clearly moving in a direction unilaterally in many different spheres. Who would you like to intervene now?”

Barghouti: “Look I believe our case is very similar to the case of South African people who struggled against apartheid. There was a time when most governments turned their backs to Nelson Mandela who was described as a terrorist. […] I think the peoples of the world are now realising how just the cause of the Palestinians is and how it is unacceptable to allow Israel to create a system of apartheid in the 21st century.”

After a break, Iqbal returned to the story at 30:06 with more of the same messaging.

Iqbal: “We’re going to return to our top story today – the story that’s dominating our programme – the opening of the new US embassy in Jerusalem: an issue that has been hugely contentious. The Israelis of course welcoming it. Palestinians and many in the international community seeing it as going against international consensus.”

At 36:09 Iqbal spoke to former US Senator Joe Lieberman who was at the US embassy event and –as she clarified – was one of those who put forward the 1995 Jerusalem Embassy Act.  Iqbal told listeners:

Iqbal: “It [the act] did pass both Senate and the House but it was not signed into law by then president Bill Clinton.”

That obviously implies to BBC audiences that the Jerusalem Embassy Act did not become law. In fact, a footnote states:

Ignoring the fact that in his December 6thstatement the US president specifically said “[w]e are not taking a position of any final status issues, including the specific boundaries of the Israeli sovereignty in Jerusalem, or the resolution of contested borders”, during their conversation Iqbal ‘asked’ Lieberman:

Iqbal: “The president could have said though – couldn’t he? – that the US would move its embassy to west Jerusalem. The idea of claiming Jerusalem in its entirety as the capital sends out a very hostile – at the worst – but in some respects not a neutral position or signal to the Palestinians.”

Iqbal again promoted the ‘US embassy relocation as the end of the peace process’ theme.

Iqbal: “Do you think there still is scope for a peace process?”

She promoted another recurring theme by referring to the opening of the US embassy in Jerusalem as a decision that “puts Washington completely at odds with the rest of the international community” and when her interviewee responded that “a country puts its embassy in the city that the host country declares to be its capital”, Iqbal interrupted him.

Iqbal: “But Senator Lieberman – I’m so sorry to interrupt you – under the UN resolution East Jerusalem is occupied territory.”

Iqbal did not bother to clarify to listeners that the UNSC resolution to which she referred – 2334 – is non-binding.

At 45:03 Iqbal introduced her final pre-recorded interviewee – the head of an American political NGO that claims to have been trying (obviously unsuccessfully) to “promote a just resolution” to the Arab-Israeli conflict since 1979. Listeners however were not provided with background on that NGO’s political stance (as required by BBC editorial guidelines) which would help them put the contributor’s words into context.

Iqbal: “We are going to stay with our top story now and hear from Lara Friedman who is president of the Foundation for Middle East Peace in Washington. I began by asking her a little while ago how significant she thought the move was for the embassy from Tel Aviv to Jerusalem.”

Unsurprisingly, Friedman’s responses dovetailed with the themes Iqbal had chosen to promote throughout the programme.

Freidman: “The moving of the embassy has been a red line politically.”

Iqbal: “The Palestinians argue that in doing this President Trump and the United States has placed itself on the side of the occupying power and that by recognizing Jerusalem in its entirety as the capital of Israel, it is in violation of international law since East Jerusalem is an occupied territory recognised by international law. Is there any scope in taking that route?”

Friedman: “It isn’t the Palestinians who say that – it’s pretty much the rest of the world except for Guatemala and possibly Paraguay down the road. This is not a move that is recognised as legitimate by anyone and on the question of whether or not President Trump is taking the side of Israel – the occupier – I mean Mr Trump himself has said ‘I’ve taken Jerusalem off the table’.”

Freidman: “The United States really has in the views of almost anyone who looks at this issue seriously, they have taken themselves out of the room as a viable or credible steward of a peace process…”

And with that cosy little echo-chamber interview, ‘Newshour’ reporting on the topic of the opening of the new US embassy in Jerusalem came to a close.

As we see BBC audiences worldwide were fed a highly regimented view of the topic of the US decision to move its embassy to Jerusalem. They heard no serious discussion of the topic of the ‘international law’ to which Iqbal and some of her guests repeatedly referred as though it was not open to different interpretation. The idea that the US embassy’s move brings about the demise of the ‘peace process’ was repeatedly promoted with no discussion whatsoever of any additional factors affecting that process and the notion of the United States being at odds with an ‘international consensus’ was amplified unquestioningly.

Just as it was all too obvious what impression of the opening of the US embassy in Jerusalem  BBC audiences were intended to take away, the programme’s presentation of the second topic on the ‘split screen’ – the Gaza border rioting on May 14th – was equally monochrome, as we will see in a separate post.

BBC WS radio’s ‘Newshour’ and the split screen – part one