The BBC unquestioningly amplified claims made by the UN Human Rights chief - but are they accurate?

On May 18th the BBC News website published an article headlined “Israel’s Gaza response ‘wholly disproportionate’ – UN rights chief” which was largely devoted to uncritical amplification of statements made by the current United Nations High Commissioner for Human Rights. 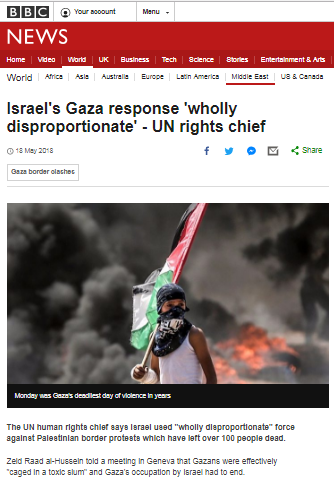 Zeid Raad al-Hussein told a meeting in Geneva that Gazans were effectively “caged in a toxic slum” and Gaza’s occupation by Israel had to end. […]

Mr Zeid told the emergency session on Gaza that the “stark contrast in casualties on both sides is… suggestive of a wholly disproportionate response” by Israel.

He said there had been “little evidence of any [Israeli] attempt to minimise casualties”. Israel’s actions might, he said, “constitute ‘wilful killings’ – a grave breach of the Fourth Geneva Convention”, an international law designed to protect civilians under occupation.

Mr Zeid said he supported a call for an “international, independent and impartial” investigation into the violence in Gaza, adding that “those responsible for violations must in the end be held accountable”.

“End the occupation, and the violence and insecurity will largely disappear.””

Of course Israel disengaged from the Gaza Strip almost thirteen years ago but “the violence” on Hamas’ part has only increased since.

Without clarifying either that the Gaza Strip was included in the territory assigned by the League of Nations to the creation of a homeland for the Jewish people or that it was occupied by Egypt between 1948 and 1967, the BBC told readers of this article that:

“Israel occupied Gaza in the 1967 Middle East war. Although it withdrew its forces and settlers in 2005, the UN still considers the territory occupied because Israel retains control over the territory’s air space, coastal waters and shared border.”

This is not the first time that the BBC has made that claim regarding the UN’s approach. As has been pointed out here before:

“In January 2012, responding to a question from UN Watch, the UN’s chief spokesperson explained why the UN still refers to the Gaza Strip as ‘occupied’ even though Hamas has said it is not and Israel disengaged from the area in 2005.

Spokesperson:  “Under resolutions adopted by both the Security Council and the General Assembly on the Middle East peace process, the Gaza Strip continues to be regarded as part of the Occupied Palestinian Territory.  The United Nations will accordingly continue to refer to the Gaza Strip as part of the Occupied Palestinian Territory until such time as either the General Assembly or the Security Council take a different view.”

Question:  “Can I follow up on that?  It is the legal definition of occupation and why is Gaza considered occupied?”

Furthermore, there is a resolution from the General Assembly from 20 December 2010, and while it noted the Israeli withdrawal from the Gaza Strip and parts of the northern West Bank, it also stressed, in quotes, “the need for respect and preservation of the territorial unity, contiguity and integrity of all of the Occupied Palestinian Territory, including East Jerusalem”.  So just to repeat that the United Nations will continue to refer to the Gaza Strip as part of the Occupied Palestinian Territory until either the General Assembly or the Security Council take a different view on the matter.””

The only criticism of Zeid Raad al-Hussein’s statements seen in this article came in the form of 66 words describing generalised reactions from Israel’s Ambassador and The US Chargé d’Affaires. The BBC itself did not attempt to provide audiences with information which would enable them to judge the accuracy of his claims.

UN Watch, however, has done just that in a useful article titled “Examining Statements by Top UN Human Rights Officials on Gaza Violence” which analyses statements made by Zeid Raad al-Hussein (who also appeared on the BBC World Service radio programme ‘Newshour’ on May 18th) and the UN Special Rapporteur on Palestine Michael Lynk who likewise appeared in BBC coverage of the ‘Great Return March’ – see here and here.

For example, with regard to Zeid’s claim that “[t]he stark contrast in casualties on both sides is also suggestive of a wholly disproportionate response…” UN Watch notes that:

“This is a completely incorrect statement of the law. As explained above proportionality in IHL [International Humanitarian Law] is not a comparison of the numbers, but a question of whether the military commander made the assessment that the expected civilian casualties would not be excessive in relation the anticipated military gain in that situation. According to Zeid, Israel must allow its soldiers and citizens to be attacked and killed before it can fight back in self-defense. That is not the law.”

“Saying how many “Palestinians” or “demonstrators” were killed wrongly implies that all those killed were peaceful, non-violent protesters. This is an outright lie. Hamas’s own political bureau member Salah al-Bardawil, admitted on May 16, 2018 that 50 of those killed in the previous day’s clashes had been Hamas operatives, and called them “martyrs.””

The BBC’s uncritical and unquestioning amplification of Zeid’s statements includes the claim that:

“Israel’s actions might, he said, “constitute ‘wilful killings’ – a grave breach of the Fourth Geneva Convention”, an international law designed to protect civilians under occupation.”

However, UN Watch explains that:

“…Palestinian rioters directly participating in hostilities are not entitled to the protection afforded to civilians. Article 51(3) of the First Additional Protocol to the Geneva Conventions (1949) permits attacks on civilians “for such time as they take direct part in hostilities.” According to the ICRC commentary, this means “acts of war which by their nature or purpose are likely to cause actual harm to the personnel and equipment of the enemy armed forces.” Therefore, engaging in violent acts intended to breach Israel’s border fence with Gaza and/or cause harm on the Israeli side of the fence would cause rioters to lose protected civilian status.”

It comes of course as no surprise whatsoever to see the BBC unquestioningly amplify statements made by the head of a UN body that the BBC regularly quotes and promotes uncritically, especially as those statements dovetail with many of its own regularly promoted themes such as ‘disproportionate’ Israeli actions and ‘occupation’ of the Gaza Strip.

Nevertheless, the BBC cannot claim to be providing audiences with information that will help them “understand” this subject – as it is obliged to do – by blindly regurgitating statements ostensibly based on facts and law without establishing their accuracy and while failing to provide any alternative view.

BBC News website amends a report with an inaccuracy