The BBC's record of under reporting Iran's terror financing continues.

While the BBC News website did not produce any reporting on the June 8th ‘Great Return March’ events along the border between Israel and the Gaza Strip, it did publish an article the previous day titled “Israel blames Iran for Gaza border violence“. 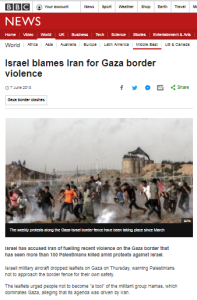 Readers were told of flyers distributed by the IDF in advance of the event.

“Israel has accused Iran of fuelling recent violence on the Gaza border that has seen more than 100 Palestinians killed amid protests against Israel.

Israeli military aircraft dropped leaflets on Gaza on Thursday, warning Palestinians not to approach the border fence for their own safety.

The leaflets urged people not to become “a tool” of the militant group Hamas, which dominates Gaza, alleging that its agenda was driven by Iran.”

Towards the end of the report readers also found the following:

“In the leaflets dropped on Gaza Israel’s military repeated its warning to Palestinians to not go near the heavily-fortified border fence.

“For your own benefit, it is better that you not participate in the violent riots at the fence, not attempt to breach it, and not permit Hamas to turn you into a tool to advance its narrow agenda,” the message said.

“Behind this agenda is Shia Iran, which has made it its mission to inflame tensions in the region for the sake of its religious and sectarian interests.”

Iran is a major supporter of Hamas, which it backs financially and militarily. The two sides fell out after Hamas refused to support Iran’s ally, Syrian President Bashar al-Assad, in the civil war in Syria, but they have since reconciled.”

The BBC’s report did not inform audiences that the Palestinian Islamic Jihad – which has claimed at least four military operatives among the fatalities of the ‘Great Return March’ rioting and also claimed joint responsibility for the mortar and missile attacks on Israel near the end of May – is, in the words of one expert, “a wholly owned franchise” of Iran’s Islamic Revolutionary Guards Corps.

Neither did the BBC bother to tell readers that not only Israel has noted Iran’s influence on the Hamas-organised ‘Great Return March’. Last week it was reported that:

“The Palestinian Authority informed the French government last month that Iran was financing and encouraging the weeks of violent protests along the Gaza border, Channel 10 reported Tuesday.

MEMRI has documented criticisms of Hamas for following Iran’s agenda in the Arab media while Arab affairs analyst Avi Issacharoff reports that:

“A special iftar feast was held in Gaza City last Thursday at the end of the day’s Ramadan fast, marking the annual Quds (Jerusalem) Day — an event initiated by Iran in 1979 to express support for the Palestinians and oppose Zionism and Israel.

During the event, dinner was served to families of killed and injured Gazans, in a manner similar to many other iftar meals.

Nonetheless, what made Thursday’s event different was the Iranian sponsorship: The event was marked and celebrated in order to send a message of appreciation and respect to Iran. It was paid for by the Tehran regime.

Moreover, Ali Akbar Velayati, one of the closest advisers to Supreme Leader Ali Khamenei and himself a senior official in the Iranian government, addressed the gathering via the internet.

Every Palestinian wounded near the fence gets approximately $250, a pretty significant sum of money by Gaza standards. According to assessments in Gaza, it is Iran that is funding these payments.”

Apparently the BBC preferred not to connect the dots between Iranian financial support for the ‘Great Return March’ (and Hamas in general) and the fact that the events continued past their declared climax to an annual event invented by the Iranian regime.

“Fresh protests are planned for Friday.

It will be the last Friday of the Islamic holy month of Ramadan and also al-Quds (Jerusalem) Day in Iran, when demonstrations are held against Israel.”

At the Jerusalem Post, Seth Frantzman pointed out that:

“With Qatar cutting funding, Hamas has few friends and few sources of income in the region. It also has few sources of weapons after Egypt flooded the tunnels linking its smugglers with Sinai. Its eight weeks of mass protests also did not succeed in getting it much support. Isolated, Hamas sees Quds Day as a chance to rally support again. If it can find thousands to turn out, less than the million promised, it will still succeed in finding relevance and increase its connections to Tehran.”

As noted here in the past, the BBC has been remarkably coy about providing its funding public with information on Iran’s terror financing activities and audiences have seen little if any serious coverage of the topic of Iran’s renewed support for Hamas and its incentive payments to Palestinian terrorists. It is therefore hardly surprising that it has elected to portray Iran’s links to the ‘Great Return March’ agitprop as Israeli ‘allegations’.

BBC audiences in the dark on Iranian terror financing yet again

Filling in the blanks in BBC reports on Hamas, Qatar and Iran