In breach of editorial guidelines, the BBC failed to inform audiences of the 'particular viewpoint' of a representative from a political NGO brought in to comment on the US quitting the UNHRC.

In part one of this post we saw how the BBC News website’s portrayal of the June 19th US announcement that it would leave the UN Human Rights Council failed to clarify to audiences that the decision – which had been on the cards for a year – came about because the UNHRC did not carry out what the US considers to be “essential reforms”.

The same story was the topic of an item aired in the June 19th edition of the BBC Radio 4 programme ‘The World Tonight’. Presenter Ritula Shah introduced it (from 22:35 here) as follows: [emphasis in italics in the original, emphasis in bold added] 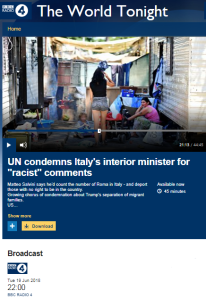 Shah: “Well a body that might have been charged with examining Italy’s plans for the Roma is the United Nations Human Rights Council and in the last few minutes the United States has announced that it’s pulling out of that organisation. The US ambassador to the UN is Nikki Haley.”

Listeners then heard a recording of part of the statement made by the US Ambassador at the press conference at which the US decision was announced.

Haley: “…the United States is officially withdrawing from the UN Human Rights Council. In doing so, I want to make it crystal clear that this step is not a retreat from human rights commitments; on the contrary, we take this step because our commitment does not allow us to remain a part of a hypocritical and self-serving organization that makes a mockery of human rights.”

Shah: “The mission of the UNHRC is to promote and protect human rights around the world. But when it was founded in 2006 the Bush administration declined to join, complaining that it included repressive states. The US has also repeatedly accused the body of being anti-Israel. Washington relented under President Obama and the US has been among the 47 countries elected to the council three times with the last 3-year term beginning in 2016.”

Remarkably the person chosen by ‘The World Tonight’ to comment on that story was the head of a political NGO with a long-standing anti-Israel bias who himself is infamous for having something of an obsession – particularly visible on Twitter – with that country. ‘Human Rights Watch’ had put out a press release concerning the US decision prior to this programme going on air and some of its themes were recycled in the Radio 4 item.

Shah: “Well Kenneth Roth is the executive director of the international human rights organisation ‘Human Rights Watch’ and he joins me now. [….] Kenneth Roth; Nikki Haley says the US hasn’t retreated from its human rights commitments. What difference then will its departure make – from the council – make?”

Roth: “Well I mean I wish it were true that the US hadn’t retreated from its commitments. I don’t see a lot of effort to stop, you know, Syrian slaughter of civilians, to stop the Saudis from indiscriminately bombing and starving civilians in Yemen, to defend the Rohingya who were ethnically cleansed from Myanmar. So you know I would quarrel with her there but in terms of the UN Human Rights Council, you know the US seems to be making two points. One is that some abusive states sit on the council – which is true. And that’s really the fault of different regions of the world who nominate them and then don’t give the UN General Assembly members the choice. They basically say ‘here are the same number of candidates as openings: take ’em or leave ’em’. And you have no choice but to take them.”

Shah: “So among the current members: the DRC, Egypt, China – all of which could be criticized for their human rights record.”

Roth: “Absolutely. But even given that, the Human Rights Council has done a lot of good. It has actually done very serious investigations and condemnations in places like Syria, Yemen, North Korea, Myanmar. The problem is, it also criticises Israel and what this is really about…”

Shah [interrupts]: “But it’s a bit more than just criticising Israel, isn’t it? Israel is the only country that actually has a permanent space on its [the UNHRC] agenda – so-called Agenda 7 – which stipulates that alleged Israeli human rights abuses in the Palestinian conflict should be reviewed every council meeting.”

Roth: “That’s true and that’s something that the US has complained about a lot. But the truth is the US votes against resolutions criticising Israel even under other agenda items that apply to everybody. So it’s a bit hypocritical. Yes, they can complain about Agenda Item 7 but it never criticises Israel’s human rights abuses under this administration.”

Shah: “But it is strange that in that sense the US isn’t the only country that’s pointed this out. Even Ban Ki Moon the former UN Secretary General and the EU have pointed out that singling out Israel when there are human rights abuses all over the world is strange and slightly undermines the council’s credibility.”

Roth: “Well you know ‘Human Rights Watch’ has pointed this out as well but the real issue is, you know, does the Human Rights Council do more good than harm and it does enormous good in many places around the world.

Roth’s claim that HRW “has pointed this out” is apparently based on previous statements the NGO’s staff such as this one last year from its Geneva director, John Fisher, in which he effectively compared Israel’s human rights record to those of two repressive dictators infamous for murdering their own people:

“It is an anomaly that there is a dedicated agenda item in a way that there isn’t for North Korea or Syria or anything else,” he said.”

Roth went on to promote more of the messaging found in his NGO’s press release, even using the same words:

Roth: “But the Trump administration basically has a one-dimensional human rights policy. Ahm…it wants to defend Israel from criticisms above all else. So even given this…ahm…this fault in the council that it has this idiosyncratic stand-alone item for Israel, none the less most governments say we’re gonna work with the council; we can try to amend that Agenda Item but it does a lot of good. But the Trump administration’s in essence saying that we want to undermine the council because it criticises Israel…”

Shah: “Well it is interesting though….”

Roth: “…and the rest of the good work it does can be damned.”

Shah: “Item 7 was inserted after the organisation was formed. Perhaps if some sort of reform of the council to make it more balanced, to take into account the points that you’ve made at the beginning that it also includes countries that actually could be accused of human rights abuses, when actually its formation, its purpose is supposed to defend human rights and demand of its members the highest standards in defending human rights – those issues could have been tackled, couldn’t they?”

Shah failed to inform listeners that the US had been trying for a year to introduce exactly such reforms. Neither was it clarified to audiences that the “reform process” subsequently referred to by Roth is not the same one that the US was promoting or that his organisation – along with others – had actively opposed the US’s proposed reforms.

Roth: “Yes, there’s actually an active reform process underway at the UN Human Rights Council in Geneva. And the US government was participating in that process until now. Now it’s walking away. So ironically it’s less likely to get any reforms by turning its back on the council but that’s why I don’t think this move is really about reform. This move is about trying to discredit the council because the council criticises Israel and that one-dimensional policy is just fortunately not where the rest of the world is. The rest of the world recognises there’s a need to address serious problems elsewhere in the world as well.”

Ritula Shah closed the item there. Listeners were not informed – as BBC editorial guidelines on impartiality require – of the “particular viewpoint” of Ken Roth and Human Rights Watch on Israel despite that being of obvious relevance since his messaging was given an almost unchallenged stage.

And so, listeners to BBC Radio 4 heard a person presented as the head of an authoritative sounding “international human rights organisation” telling them repeatedly that the US withdrawal from the UNHRC is actually “really about” Israel and – as was the case in his organisation’s press release – that because of Israel, human rights in the rest of the world will suffer.

BBC portrayal of US decision to leave UNHRC – part one