A BBC map fails to reflect UNDOF's 2014 relocated to the Israeli side of the Golan DMZ.

An article titled “Syria war: Air strikes knock out hospitals in Deraa” which appeared on the BBC News website on June 27th includes a map showing the areas under the control of different parties in south-west Syria.

As can be seen below, the UN Disengagement Observer Forces (UNDOF) are portrayed as being present in the demilitarised zone that came into existence under the terms of the  1974 Disengagement Agreement between Israel and Syria. 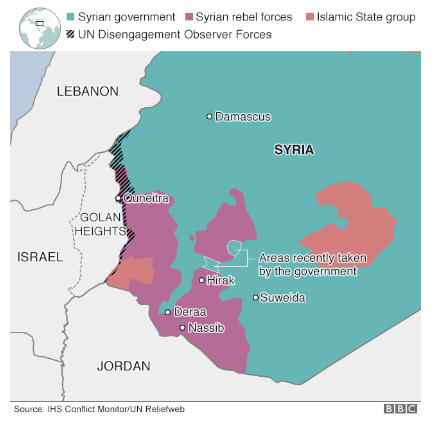 However, as noted in this report from May 31st, UNDOF vastly reduced its physical presence in the so-called demilitarised zone nearly four years ago when it redeployed to the Israeli side.

“The mission’s observation role has been limited since its September 2014 relocation to the Alpha side of the ceasefire line. […]

Israel and Syria value UNDOF’s presence and want to see the mission return to the Bravo side. However, the security situation on the Syrian side is still not conducive to full redeployment of UNDOF troops. Council members continue to support the eventual complete return of UNDOF to the Bravo side but are mindful that this would require a favourable security environment, which is crucial for maintaining the confidence of troop-contributing countries.”

As the UN Security Council noted when it last extended UNDOF’s mandate, the so-called demilitarized zone has long failed to live up to its name.

“Stressing that there should be no military forces in the area of separation other than those of UNDOF,

Strongly condemning the continued fighting in the area of separation, calling on all parties to the Syrian domestic conflict to cease military actions in the UNDOF area of operations and to respect international humanitarian law,

Moreover, it was recently reported that Syrian regime troops have taken over an abandoned UNDOF position in the DMZ in violation of the 1974 agreement.

While the UNSC stated that “the ultimate goal is for the peacekeepers to return to their positions in UNDOF’s area of operations as soon as practicable” that is currently not the case and so the BBC’s portrayal of the DMZ as being an area in which UNDOF has a physical presence is inaccurate and misleading to audiences.