A pseudo-legal pronouncement and identity politics on BBC One Sunday morning TV.

BBC One has a programme called ‘Sunday Morning Live’ – currently presented by Sean Fletcher and Cherry Healey – which purports to provide BBC audiences with “thought provoking discussions of ethical questions of the week“.

The July 1stedition of that programme (available in the UK here) included a papers review together with guests presented by Fletcher as “journalist and writer Christina Patterson and comedian Aatif Nawaz“.

Sean Fletcher began by erasing one-third of the itinerary of the recent royal visit to Jordan, Israel and territories controlled by the Palestinian Authority. [emphasis in italics in the original]

Fletcher: “And this week in – well – his biggest diplomatic test, Prince William became the first member of the royal family to make an official visit to the Palestinian territories. The Duke of Cambridge, who started his Middle East trip in Jordan, toured a market in Ramallah and spent a moment in quiet prayer at the holy Wailing Wall [sic] in Jerusalem’s Old City.”

Healey: “Christina – such a sensitive issue: how do you think he did?”

Patterson: “I thought he did amazingly well I must say. People tend to speak about Prince William as if he’s, you know, nice bloke, not Einstein, ehm…and, you know, that may be true but I have to say this is a diplomatic minefield and he was clearly very, very carefully briefed. But he didn’t put a foot wrong and he managed to win both sides over.”

Viewers then saw the journalist Patterson – who, as a person on record as claiming that Israelis “raze homes and build new ones on someone else’s land” and “destroy their neighbours’ crops and treat them like criminals” may not have been the most objective commentator on Israel related topics that the BBC could have come up with – make the following pseudo-legal pronouncement:

With the programme’s presenters making no effort to inform audiences of the existence of alternative legal views concerning an issue on which Patterson is clearly not qualified to tell viewers what is “accurate” or not, she went on to potentially confuse them with a reference to the president of a country that they had not been told was included in the visit.

Patterson: “But really, to have got the Israeli president and the Palestinian president and all those people in all those different factions on his side [sic] was an astonishing achievement. And it was also very touching to see how he related to people and I think in particular he was profoundly moved by the plight of the Palestinians and I think, you know, good on him. He really brought quite…something quite tricky off.” 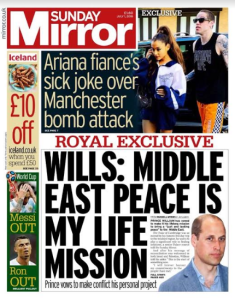 Fletcher then went on to refer to an article in the Sunday Mirror.

Fletcher: “Yeah, Aatif: the front of the Sunday Mirror – ‘Wills: Middle East peace is my life mission’ so according to the Mirror. That, I mean, that’s a tall order. In terms of religious and political tightropes, this is as high as they get, isn’t it?”

Nawaz: “Well I like that he’s up for the challenge, you know, because it is very challenging. You see a lot of heads of state and, you know, people in positions of influence or privilege avoid these situ…or avoid talking about the Middle East or avoid talking about the conflict or the two-state solution or whatever it is that’s brought up about it. But he’s going for it and I really like that because, you know, there’s this perception about the royal family – sometimes they’re very passive and they don’t play a role or they certainly want to avoid talking about anything controversial and it’s a very ceremonial thing. Whereas this is like a really noble, admirable aim for his [unintelligible]. He’ll win a lot of supporters in the Muslim community for acknowledging the occupied Palestinian territories and Palestine and the life of the Palestinians. So I think it’s great and if he could…listen, I’m backing it.  What can I do to help, prince? You tell me ‘cos that’s like let’s bring peace to the Middle East.”

That identity politics dog-whistle closed what apparently passes for “thought-provoking discussion” at BBC One.