When the BBC News website published its July 10th report concerning Israeli actions in light of three months of arson attacks from the Gaza Strip, it also offered readers some background reading. 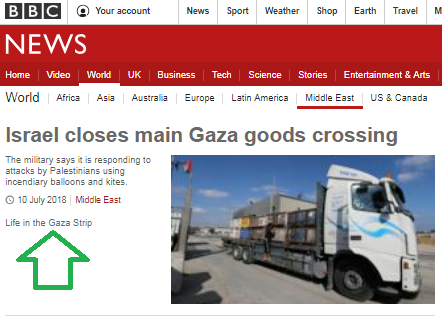 Titled “Israel-Palestinian conflict: Life in the Gaza Strip“, that backgrounder first appeared in November 2012, was revamped in July 2014 and has been amended on numerous occasions since then, most recently in May 2018.

In its second paragraph the backgrounder tells BBC audiences that:

“It [the Gaza Strip] is under the control of the Palestinian Authority, and between 2007 and 2014 was ruled by the militant Islamist group Hamas. They won Palestinian legislative elections in 2006 but then had a violent rift with the rival Fatah faction.” [emphasis added]

Obviously those claims are not accurate: the PA does not exercise control over the territory and Hamas rule did not end in 2014.

Readers are then told that:

“When Hamas took over in Gaza, Israel swiftly imposed a blockade on the territory, restricting the movement of goods and people in and out. Egypt meanwhile blockaded Gaza’s southern border.”

No mention is made of the fact that the counter-terrorism measures imposed by Israel after Hamas’ violent coup in Gaza were a response to increased terror attacks against Israeli civilians.

Once again with the relevant issue of Palestinian terrorism concealed from audience view, under the sub-heading ‘Freedom of Movement’ BBC audiences find the following:

“In the north, crossings into Israel at Erez have picked up marginally this year compared with 2017, but remain well below pre-blockade levels due to new restrictions.

According to UNOCHA (quoted on a different topic in the same section), during the first half of 2017, 43,009 people crossed from the Gaza Strip into Israel via the Erez Crossing. Obviously that BBC claim is inaccurate and grossly misleading. Readers are not told that the cited comparison date “September 2000” was immediately before the second Intifada and – crucially – the launching of countless terror attacks from the Gaza Strip.

The context of terrorism – and the resulting restrictions on the passage of workers from the Gaza Strip into Israel and trade – is likewise absent from the backgrounder’s section titled “Economy”.

“Gaza has one of the highest population densities in the world. On average, some 5,479 people live on every square kilometre in Gaza. That’s expected to rise to 6,197 people per square kilometre by 2020.

In a section sub-titled “Health” the BBC once again disseminates inaccurate and misleading claims.

“Access to public health services has worsened due to border restrictions. […]

Exit passes through Israel have also dropped in recent years, with approvals for medical reasons dropping from 93% in 2012 to 54% in 2017.

Moreover, drugs, supplies and equipment are all restricted because of the blockade – including dialysis machines and heart monitors.”

As has been noted here on previous occasions, the restrictions placed on the import of dual-use goods (i.e. items which can be used for terrorist purposes) to the Gaza Strip do not apply to medical supplies. The party responsible for medical services in the Gaza Strip is the Palestinian Authority and it is that body which last year exacerbated the chronic crisis affecting  the healthcare system in Gaza by severely cutting medical aid and referrals for treatment in Israel.

The backgrounder goes on:

“A recent fuel shortage for generators has also affected medical services. The Palestinian Ministry of Health says three hospitals and ten medical centres have suspended services due to a lack of power.”

It is of course the Palestinian Authority which is responsible for the fuel and power shortages in the Gaza Strip that have affected medical services but the BBC’s backgrounder implies that too is attributable to “border restrictions” – i.e. Israeli counter-terrorism measures.

While a section titled “Power” includes an interestingly punctuated link to a 2017 report billed “PA ‘stops paying for Gaza electricity'”, the backgrounder itself does not clarify that in 2011 Hamas elected to discontinue the purchase of fuel from Israel for Gaza’s power plant, instead relying on an erratic supply via smuggling tunnels which were later destroyed by Egypt or that internal disagreements between the Palestinian Authority and Hamas resulted in an exacerbation of the power crisis in the Gaza Strip during 2017.

Similarly, a section titled “Water and sanitation” fails to inform BBC audiences that sewage pipes in the Gaza Strip were used to make rockets, that new supplies of pipes transported in by Israel were diverted for the same purpose rather than being used to solve the Gaza Strip’s sanitation problems or that the electricity crisis exacerbated by the dispute between the PA and Hamas has also seriously affected sewage treatment and water supply.

Obviously this ‘backgrounder’ does not give BBC audiences an accurate and impartial view of the reasons why “life in the Gaza Strip” is as it is. The BBC’s failure to report impartially on Hamas’ responsibility for the deterioration of conditions in the Gaza Strip – brought about by its putting continued terrorism against Israeli civilians at a higher level of priority than taking care of the population’s welfare – clearly means that this backgrounder is not fit for purpose and does not meet the BBC’s public purpose of helping audiences understand “issues across…the world”.

Gaza Strip background the BBC does not provide