The BBC's one-sided promotion of a blatantly political campaign goes on.

Early on the morning of July 29th the BBC News website published an article billed “Palestinian viral slap video teen freed” on its main homepage as well as on its ‘World’ and ‘Middle East’ pages. The framing of the story was reinforced using two items of previously published related content offered to audiences under the headings “Was slap terrorism?” (discussed here) and “Spotlight on slap video teen” (discussed here). 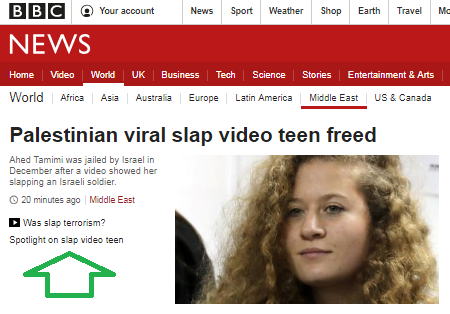 Clearly the intention was to lead BBC audiences towards the understanding that this story is about a “Palestinian teen” who had been in prison because of a filmed “slap” even before they had read one word of the report.  That same framing was evident in the vast majority of the large number of reports on this story produced by the BBC between December 2017 and March 2018 (see ‘related articles’ below).

The latest article opens in the same style:

“A Palestinian teenager who was filmed assaulting an Israeli soldier in the occupied West Bank has been freed after eight months in jail.

Only in the article’s seventh paragraph were readers told that there is actually more to the story than a “slap”.

“Sixteen at the time, she was originally charged with 12 counts of assault, incitement, interference with soldiers and stone throwing.

In March, she agreed to plead guilty to four of the charges, including incitement and assault.”

However, once again BBC audiences were not informed in this report that the charge of incitement to which Ahed Tamimi pleaded guilty relates to the fact that in the same video produced and distributed by her mother in which she was filmed assaulting soldiers, she also made a public call for violence.

“Whether it is stabbings or suicide bombings or throwing stones, everyone must do his part and we must unite in order for our message to be heard that we want to liberate Palestine”

Readers were also told that:

“Ahed Tamimi told a pre-trial hearing that she had lashed out at the soldiers because she had seen them shoot her 15-year-old cousin Mohammed in the head with a rubber bullet that same day.

The Israeli military said it had dispatched the soldiers to the Tamimis’ home, where Palestinian youths had been throwing stones at troops sent to quell violent protests.

It also later contested the cause of Mohammed’s head injury, saying last month that the boy had told interrogators he sustained it from falling off a bike.”

That link leads to a Times of Israel report from February 2018 – not “last month” as this article claims. Apparently in the haste to get this article out, the BBC’s copy/paste from one of its own reports published in March went awry.

As has been the case in many of the BBC’s previous reports on this story, readers found promotion of the Tamimi brand:

“For Palestinians, she became a symbol of resistance to Israeli occupation, but many Israelis see her as a publicity-seeking troublemaker. […]

For Palestinians, Ahed Tamimi has become a national icon for what they see as acts of bravery in standing up to armed soldiers on occupied land.

Her face has appeared on street murals and posters, while an online petition organised by her father calling for her release gathered 1.7m signatures.”

However, they were not informed that violent rioting has been taking place weekly in Nabi Saleh since December 2009, that Ahed Tamimi’s father Bassem is the main organiser of those Friday riots or that, together with other family members, he and his brother Bilal run a ‘news agency’ called ‘Tamimi Press’ which produces and distributes footage and images from those weekly riots, often featuring children from the Tamimi clan such as Ahed.

Between December 19th 2017 and March 22nd 2018 the BBC produced at least fourteen reports on this story but only in one of those – aired on a domestic BBC radio station – were audiences been provided with any information concerning the background to the charge of incitement against Ahed Tamimi. The BBC’s treatment of this story – including this latest report – has overwhelmingly diverted audience attention away from the main charge of incitement against Ahed Tamimi and propagated the deliberately misleading notion that she was arrested, tried and imprisoned for a “slap”.

That deliberate repeated framing of the story indicates that the corporation which is committed to providing its audiences with “accurate and impartial news […] of the highest editorial standards” has in this case chosen to abandon impartiality and accuracy – and instead lend its voice and outreach to one-sided promotion of a blatantly political campaign.

BBC continues its campaigning with eleventh report on Ahed Tamimi

The BBC’s partisan coverage of the Ahed Tamimi case continues