The BBC continues to amplify conspiracy theories no different from those put out by the regime controlled news agencies of Syria and Russia.

As documented here previously, after the IDF announced on July 22nd the completion of the overnight evacuation of hundreds of Syrian ‘White Helmets’ personnel and their families from southern Syria, through Israel and into Jordan, the BBC News website published two articles amplifying Syrian regime and Russian propaganda concerning that group.

Yet more amplification of that propaganda was seen in one version of an article on a different topic published two days later. 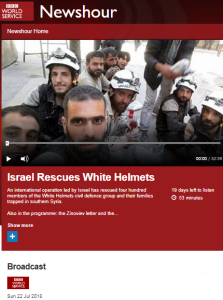 Coomarasamy: “We begin though in Syria where the rescuers – or some of them at least – have been rescued. According to the Israeli and Jordanian authorities, an international operation has managed to evacuate hundreds of members of the volunteer civil defence force known as the White Helmets and some of their family members from the country. The White Helmets have become a familiar presence at the scene of attacks in Syria but the Assad government and its Russian allies have condemned them as terrorist sympathisers.”

Coomarasamy then went on to report that Western diplomats had been commenting on the rescue operation and read out a Tweet from the British foreign secretary, before introducing (at 01:57) journalist Paul Ronzheimer of ‘Bild’ who had witnessed and reported the event. 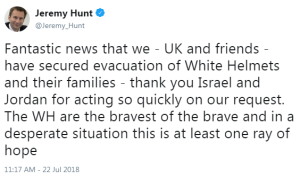 Following that conversation Coomarasamy introduced (at 06:30) the founder of the ‘White Helmets’, James Le Mesurier, who explained that the group’s members “are under extraordinary threat” because “they have been – and continue to be – witnesses to the regime and Russian atrocities on the ground”.

When Mr Le Mesurier mentioned “the evacuation of fighters in buses, including those terrorist organisations that the regime claims to be fighting”, Coomarasamy interrupted him (at 10:58):

Coomarasamy: “And of course…yeah and of course the regime would say that the ‘White Helmets’ are a front for some of those organisations.”

Coomarasamy nevertheless persisted with his theme (11:51):

Coomarasamy: “But I wonder, does this operation – the fact that it was Western-led – will that not only add credence to some of the arguments that the Assad government tries to make about the ‘White Helmets’?”

The same story was also the lead item in the later edition of the same programme (from 00:00:57 here) and was introduced by Coomarasamy as follows: 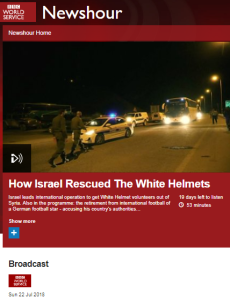 Coomarasamy: “We begin though in Syria and a rare example of international cooperation successfully coming to the aid of people apparently under threat from the Assad government. They are people who are used to coming to the aid of others – members of the civil defence force known as the ‘White Helmets’: Western backed and Western trained volunteers who help civilians in rebel held areas. Well overnight more than 400 ‘White Helmets’ and members of their family were brought out of southern Syria in an Israeli-led operation.”

After listeners had heard a voiceover translation of a statement from the Israeli prime minister on the operation, Coomarasamy continued:

Coomarasamy: “The ‘White Helmets’ are viewed by Western governments as life-saving humanitarians but the Syrian authorities and their Russian allies insist that they are a front for terrorist groups.”

Coomarasamy: “And of course…yeah and of course the regime would say that the ‘White Helmets’ are a front for some of those organisations.”

Coomarasamy: “But I wonder, does this operation – the fact that it was Western-led – will that not only add credence to some of the arguments that the Assad government tries to make about the ‘White Helmets’?”

Although in the previous edition of the programme Le Mesurier had clarified that the operation was led by the UK, Canada and Germany and supported by the US, Israel and the UN, at 08:58, Coomarasamy next chose to focus on just one of those countries, posing the following bizarre question:

Coomarasamy: “So, what does Israel get out of its role in this rescue operation?”

Notably, the person brought in to answer that question – described by Coomarasamy as “Joshua Landis…a Syria expert who heads the Center for Middle East Studies at the University of Oklahoma” – is renowned for his portrayals of the Assad regime as ‘the good guy’ in the enduring conflict (and before it) and has himself amplified propaganda pertaining to the ‘White Helmets’. It therefore came as little surprise to hear Landis – unhindered by Coomarasamy – promote some Assad-style propaganda in his own more subtle style.

Landis: “They’re doing a big favour for the United States and for the European powers in carrying out important humanitarian work and we’ve noticed that throughout the war, Israel has taken in a number of Syrian rebels as well as their family members and civilians who’ve been wounded, treated them in its hospitals, has tried to do humanitarian work in Syria. Of course Israel has been bombing Syria at the same time, attacking Iranian emplacements, Syrian emplacements, shooting down the odd Syrian plane. But for Israel this is about doing a good deed.”

Failing to clarify to audiences that Israeli strikes have targeted Iranian weapons transfers to the terror group Hizballah, Coomarasamy went on:

Coomarasamy: “But as you allude to, it’s something that’s happening on Israel’s doorstep and is very much a military conflict that Israel is getting involved in as well.”

Landis: “Yes, Israel has increasingly become involved in the Syrian civil war. It has supported a number of rebel groups, helping to build a small buffer zone. That has collapsed now, so Israel is going back to dealing with the Assad government and particularly through the Russians and this means that the rebels are collapsing and some of them are seeking asylum, through Israel, to the West.”

Landis’ roundabout portrayal of the ‘White Helmets’ as “rebels…seeking asylum” unsurprisingly went completely unchallenged by Coomarasamy as did his false claims that Israel is “involved in the Syrian civil war” and “has supported a number of rebel groups”.

As we see, the UK’s publicly funded public service broadcaster continues to amplify conspiracy theories no different from those put out by the regime controlled news agencies of Syria and Russia.