On August 7th the BBC News website published an article titled “Israeli tank fire kills two Hamas militants in Gaza” on its Middle East page. The report relates to an incident which took place earlier in the day when IDF soldiers on patrol in the northern sector of the Border between Israel and the Gaza Strip identified gunfire from the Beit Lahiya area. Hamas later claimed that the snipers were taking part in a drill held by the terror group near the border fence. 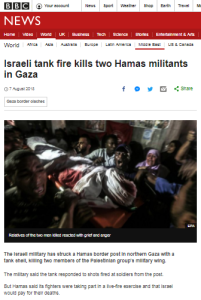 The BBC’s report on the incident opened as follows:

“The Israeli military has struck a Hamas border post in northern Gaza with a tank shell, killing two members of the Palestinian group’s military wing.

The military said the tank responded to shots fired at soldiers from the post.

But Hamas said its fighters were taking part in a live-fire exercise and that Israel would pay for their deaths.”

The last four paragraphs of that 14 paragraph report presented audiences with the BBC’s now standard narrative concerning events along the border between Israel and the Gaza Strip since the end of March, including concealment of the fact that the violent provocations have been deliberately staged by Palestinian terror groups as part of a propaganda campaign.

“In the past four months, there has been an upsurge in violence along the Gaza-Israel border.

Human rights groups have accused Israeli troops of using excessive force at the protests. Israel has said they only opened fire in self-defence or on people trying to infiltrate its territory.

One Israeli soldier has been shot dead by a Palestinian sniper during the same period, while incendiary devices attached to balloons and kites launched by Palestinians have sparked hundreds of fires in southern Israel, burning some 3,000 hectares (7,400 acres) of forest and farmland.”

As we see, the BBC once again promotes Hamas-sourced casualty figures while failing to clarify that the terror group is one of the factions involved in the organisation, financing and facilitation of what are yet again blandly described as “weekly protests”.

Readers are not told that those ‘Great Return March’ events have been characterised by violent rioting which has included hundreds of petrol bomb attacks, IED attacks, grenade attacks and shooting attacks as well as infiltration attempts. The BBC likewise refrains from clarifying that the “upsurge in violence” has also included hundreds of rocket and mortar attacks by Palestinian terror factions against Israeli civilians.

While amplifying the “declared right of Palestinian refugees to return to their ancestral homes in what is now Israel”, the BBC did not bother to inform its audiences that the intention of the Palestinian demand for ‘right of return’ is to bring about the end of the Jewish state.

For over four months the BBC has been presenting its audiences with a tightly framed portrayal of the ‘Great Return March’ publicity stunt which whitewashes its violence and downplays the role of terror factions in its organisation and execution.

Four years ago the BBC’s Director of Editorial Policy and Standards wrote that:

“Our online news is far more accessible today than the newspaper archives of libraries. But in principle there is no difference between them: both are historical records. Fundamentally it is in the public interest to retain them intact.”

“That, of course, is true only so long as those “historical records” are correct. It is not, however, in the public interest to have historical records which are misleading, inaccurate or politically biased – especially from an organisation which enjoys the public’s trust – and funding.”

Sadly, it is bland and materially misleading portrayals of the weekly violence deliberately organised for propaganda purposes by terror factions in the Gaza Strip such as the one above which the BBC is ensuring will become “historical records”.