A report which appeared on the BBC News website’s ‘UK Politics’ page on the afternoon of August 13th was initially headlined “Jeremy Corbyn pressed over ‘terror memorial’ claims”. Roughly two hours later the word terror was dropped from the headline, which was amended to read “Jeremy Corbyn ‘wreath laying’ attacked by Israeli PM“. The report was also posted on the website’s ‘Middle East’ page. 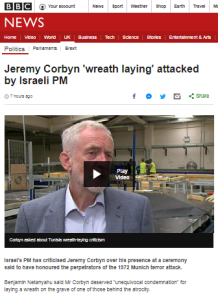 As noted on these pages last September, for decades BBC News has refrained from describing the members of the PLO faction that perpetrated the Munich Olympics massacre as terrorists. Surprisingly, the word terror was used in this report’s opening line:

“Israel’s PM has criticised Jeremy Corbyn over his presence at a ceremony said to have honoured the perpetrators of the 1972 Munich terror attack.”

However, the report later returned to form: [emphasis added]

“The questions were in response to a Daily Mail front page featuring photographs it said showed the Labour leader near memorials to members of the militant Black September group behind the 1972 attack.

Eleven members of the Israeli Olympic team were taken hostage by the Palestinian group at the 1972 summer games in Munich.”

Sixty-nine of the 778 words used in the report described the Israeli prime minister’s tweet criticising Corbyn’s participation in a 2014 event in Tunisia commemorating members of the ‘Black September’ terrorist faction responsible for the brutal murders of Israeli citizens. Forty-nine words were used to give readers background on the Munich Olympics attack itself and a further fifty-seven words related to the Daily Mail article published three days earlier which once again brought a story that first emerged in 2017 into the spotlight.

Amplification of the denials of Corbyn and the Labour Party concerning that event accounted for 35% of the article’s total word count and a further 77 words – including Labour Party denials – related to a previous event in 2013.

“Benjamin Netanyahu said Mr Corbyn deserved “unequivocal condemnation” for laying a wreath on the grave of one of those behind the atrocity.

The Labour leader said he had attended the event in Tunis in 2014 as part of a wider event about the search for peace.”

BBC audiences were not however informed that the “wider event about the search for peace” – subsequently also described as “a conference” – was titled the “International Conference on Monitoring the Palestinian Political and Legal Situation in the Light of Israeli Aggression” or that – as also reported by the Daily Mail – its participants included a senior Hamas official featured in past BBC content.

“At the event in Tunisia, top Hamas leader Oussama Hamdan presented a ‘four point vision to fight against Israel’ and praised the group’s ‘great success on the military and national levels’, adding that the violence was ‘magnificent’.

He had just given an interview to Lebanese media in which he said that the anti-Semitic myth that Jews drank Christian blood was ‘not a figment of imagination or something taken from a film. It is a fact.’

Othman Jerandi, a former Tunisian foreign minister, also gave a speech at the conference and stated: ‘ISIS and Israel are the same thing’.

Other delegates included activist Zaher Al-Birawi, who is close to the leadership of Hamas; and lawyer Sabagh al-Mukhtar, who appeared as an expert witness to support extremist cleric Abu Hamza before he was deported from Britain.”

Birawi is of course the UK-based activist involved in the organisation of both the recent failed ‘flotilla’ and the ‘Great Return March’ violent rioting that has been taking place along the border between Israel and the Gaza Strip for the past four and a half months. Birawi was also previously the director of the Hamas-linked ‘Palestinian Return Centre’ which has in the past donated to Jeremy Corbyn.

Together with Corbyn at the wreath-laying ceremony linked to that ‘conference’ was a member of the PFLP terror group and a Fatah official who has appeared in BBC content.

Despite Corbyn having subsequently made statements that contradict the claim from “Labour’s press team”, readers of this report were told that:

“On Sunday Labour’s press team said: “The Munich widows are being misled. Jeremy did not honour those responsible for the Munich killings.””

In an insert of ‘analysis’ from the BBC’s political correspondent Tom Barton readers found amplification of Corbyn’s ‘whataboutery’ – with no mention made of the fact that a significant proportion of those killed during the violent rioting and attacks were linked to terror factions – as well as amplification of a baseless but unattributed allegation.

“In his reply, Jeremy Corbyn described the Israeli Prime Minister’s accusations as false. But he also took the opportunity to say that the killing of Palestinian protesters in Gaza by Israeli forces deserves “unequivocal condemnation”. His supporters say the purpose of Benjamin Netanyahu’s message is to shut down that sort of criticism of Israel’s actions.”

In contrast to the 269 words used to report denials from Corbyn and the Labour Party, statements made by “critics” were afforded 108 words.

The BBC’s report stated that in relation to his presence at the wreath-laying ceremony, Corbyn said:

“I was there because I wanted to see a fitting memorial to everyone who has died in every terrorist incident everywhere because we have to end it.”

Readers were later told that:

“In a tweet, Labour said he and other Parliamentarians had been honouring victims of the 1985 Israeli bombings.”

As noted at the Times of Israel, the context to those statements – which the BBC did not bother to provide – is the fact that what audiences saw described as “Israeli bombings” was the response to another brutal Palestinian terror attack.

“The “terrorist incident” he was apparently referring to was an Israeli air force strike on the PLO headquarters in 1985 in response to the hijacking of an Israeli yacht and the execution of three Israeli passengers.

PLO leader Yasser Arafat escaped unharmed although several of his bodyguards and several civilians were killed in the strike, which completely destroyed the headquarters.”

Remarkably, the BBC had no ‘analysis’ to offer its audiences on the topic of the leader of a British political party – and potential prime minister – who apparently thinks that a counter-terrorism operation against the headquarters of a terrorist organisation which had claimed the brutal murders of three civilians was a “terrorist incident”.