The BBC promotes a claim from a political NGO for the third time. 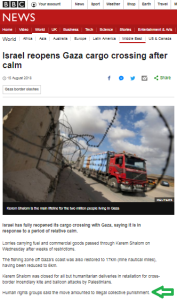 “Israel has fully reopened its cargo crossing with Gaza, saying it is in response to a period of relative calm.

Lorries carrying fuel and commercial goods passed through Kerem Shalom on Wednesday after weeks of restrictions.

The fishing zone off Gaza’s coast was also restored to 17km (nine nautical miles), having been reduced to 6km.

Kerem Shalom was closed for all but humanitarian deliveries in retaliation for cross-border incendiary kite and balloon attacks by Palestinians.”

After that reasonable account of events, the report continued with promotion of an anonymous allegation:

Those who read previous BBC reports concerning the Kerem Shalom crossing may recall that the same allegation has been promoted twice by the BBC and that it comes from the foreign funded political NGO ‘Gisha’.

On July 10th the BBC News website told audiences that:

“The damage being caused to agricultural lands in Israel is grave and deplorable, but collectively punishing nearly two million people in Gaza by closing its only official crossing for the movement of goods is both illegal and morally depraved,” it wrote on Twitter.” [emphasis added]

As noted here at the time, BBC editorial guidelines on impartiality require that audiences be informed of the “particular viewpoint” of contributors. In the case of ‘Gisha’, it would obviously be helpful to BBC audiences to know that the political NGO touting the claim of “illegal collective punishment” petitioned Israel’s Supreme Court in April, claiming that Israel’s responses to the ‘Great Return March’ violence along the Gaza border are illegal and demanding that the Court prohibit the use of live ammunition by the IDF. The court rejected that petition.

Apparently this time the BBC chose to circumvent that requirement by presenting the quote anonymously, while portraying an openly political organisation as a ‘human rights group’.

“More than 160 Palestinians have been killed by Israeli forces since the end of March – most during protests along the Gaza-Israel border at which thousands have expressed their support for the declared right of Palestinian refugees to return to their ancestral homes in what is now Israel.

One Israeli soldier has been shot dead by a Palestinian sniper during the same period.”

As has been the case throughout the last four and a half months, the BBC once again promotes Hamas-sourced casualty figures while failing to clarify that the terror group is one of the factions involved in the organisation, financing and facilitation of what are yet again blandly described as “protests”.

Readers are not told that what it euphemistically terms ‘expression of support’ has been characterised by violent rioting which has included hundreds of petrol bomb attacks, IED attacks, grenade attacks and shooting attacks as well as infiltration attempts.

While amplifying the “declared right of Palestinian refugees to return to their ancestral homes in what is now Israel”, the BBC does not bother to inform its audiences that the intention of the Palestinian demand for ‘right of return’ is to bring about the end of the Jewish state.

“The BBC’s Yolande Knell in Gaza says the reopening of Kerem Shalom crossing has raised hopes that Egypt and the United Nations could be getting closer to negotiating a more comprehensive truce between Israel and Hamas that would prevent another escalation and ease the severe economic hardship in Gaza.

On Tuesday, Israel’s finance minister confirmed a report that Mr Netanyahu had secretly met Egyptian President Abdul Fattah al-Sisi in Egypt in May. The two men are believed to have discussed the terms for a ceasefire, the easing of the blockade of Gaza, and the rebuilding of its infrastructure.”

Notably, while that portrayal of a potential “truce between Israel and Hamas” focuses audience attentions on “the severe economic hardship in Gaza”, it makes no mention of a relevant issue which the BBC has been ignoring for four years.

In addition to holding the remains of two Israeli soldiers killed in 2014 – Hadar Goldin and Oron Shaul – the Hamas terror group is also keeping prisoner at least two Israeli civilians – Avera Mengistu and Hisham al Sayed – who have not been the topic of any BBC reporting in the three years that their imprisonment has been publicly known.

If BBC audiences are to understand the negotiations behind “a more comprehensive truce”, they obviously need to be informed that the issues being negotiated are not confined to Gaza Strip related topics such as “the blockade” and “infrastructure”.