Relevant information is withheld from BBC audiences in multiple reports.

When the BBC News website reported the November 11th incident east of Khan Younis in the Gaza Strip in which an Israeli Special Forces officer was killed and another wounded in an exchange of fire that also left six Hamas members and one PRC operative dead, it correctly noted that following the incident, seventeen rockets had been launched from the Gaza Strip at Israeli civilian communities.

However, several other BBC reports have erased those rocket attacks and/or the fact that all the Palestinians killed in the incident were members of terror groups.

Listeners to the BBC World Service radio programme ‘World Update’ on November 12th were informed in a news bulletin (from 24:47 here) that: [emphasis in bold added]

“Israeli Special Forces have carried out a raid on the Gaza Strip. An Israeli officer, a Hamas military commander and another six Palestinians were killed during the operation.” [emphasis added]

No mention was made at all of the subsequent launch of 17 missiles at Israeli civilian targets by Gaza Strip based terrorists.

In a news bulletin aired in the BBC Radio 4 ‘Today‘ programme on the same day (from 01:04:30 here), listeners were told that:

“An Israeli army officer and seven Palestinians including a militant commander have been killed in the Gaza Strip during what was reported to have been an intelligence gathering operation by Israeli Special Forces It led to heavy Israeli air strikes and the firing of rockets from Gaza into Israel. Here’s our Middle East correspondent Tom Bateman.”

Bateman likewise told listeners that “among the seven Palestinians killed was a local commander of Hamas’ armed wing” and failed to note the rocket fire. 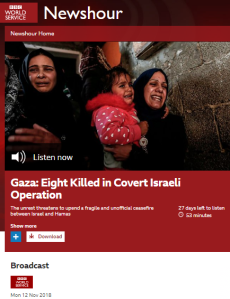 The same story was the lead item in the November 12th edition of the BBC World Service radio programme ‘Newshour‘ and listeners were told by presenter Razia Iqbal (from 00:11 here) that:

Iqbal: “On Sunday a covert Israeli operation in the Gaza Strip resulted in the deaths of seven Palestinians including one Hamas commander and one Israeli soldier – a Lieutenant Colonel. The subsequent firing of rockets into Israel from Gaza threatens to upend an uneasy peace [sic].”

Later on in the item, while talking to Hamas’ Ghazi Hamad, Iqbal remarked:

Iqbal: “But there was also a big significant loss on your side. Apart from the six other people who were killed, a senior Hamas commander, Nur Baraka.”

As we have already seen, in the November 12th edition of the BBC Radio 4 programme ‘The World Tonight’ presenter Ritula Shah likewise portrayed terror operatives as “Palestinians” and erased the subsequent rocket fire from audience view.

Shah: “An undercover operation that went awry and left seven Palestinians and an Israeli officer dead has sparked an escalation of violence in the Gaza Strip.”

“The latest violence began after an Israeli special forces undercover operation in Gaza was exposed on Sunday, triggering clashes that left seven Palestinian militants and one Israeli soldier dead.”

There is no doubt whatsoever that the BBC knows full well that all seven of those killed near Khan Younis on November 11th were operatives in terror factions and that it is well aware that Gaza Strip based terrorists subsequently fired seventeen missiles at civilian targets in Israel.

There can hence be no justification whatsoever for the repeated withholding of that relevant information from BBC audiences on various platforms.

BBC Radio 4: nothing to see in southern Israel, move along to Gaza