Another BBC report encourages audiences to believe that Hamas' attacks on civilians are comparable to Israeli strikes on terror targets.

Last week we saw how, on November 13th, the BBC News website used the term ‘traded’ to promote false equivalence between an unprecedented barrage of rocket and mortar attacks launched by Hamas and other terror factions against the civilian population in southern Israel and IDF retaliatory strikes on exclusively military targets after advance warnings were given.

The same framing was evident in the title of the November 13th afternoon edition of the BBC World Service radio programme ‘Newshour‘ – “Deadly Fire Traded Between Israel and Gaza” – and in the report itself (from 00:58 here). Presenter Julian Marshall opened that lead item with an inverted view of the order of events, placing Israeli strikes before the terrorist rocket attacks that prompted them. 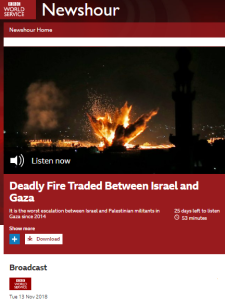 Marshall: “But we begin in the Middle East where the worst escalation of violence between Israel and…err…Palestinian militants in Gaza since a 2014 war is threatening to descend into a full-blown conflict. There’ve been more Israeli airstrikes over Gaza, more rockets fired by Hamas militants into Israel and an Israeli attack helicopter has opened fire on several people who officials suspected were trying to cross the Gaza security fence.”

The incident to which Marshall referred actually involved more than ‘suspicion’:

“Israeli Air Force aircraft attacked several suspicious Palestinians near the security fence who had been monitored by IDF surveillance and who had tried to cross the security fence in the northern Gaza Strip into Israeli territory (IDF spokesman, November 13, 2018).”

Marshall continued, using an inaccurate term to describe the exposure of an undercover IDF operation in the southern Gaza Strip two days earlier.

Marshall: “The violence follows a botched Israeli undercover operation on Sunday. But Israeli Defence Forces spokesman Jonathan Conricus said there were no plans at the moment for Israeli troops to go back into Gaza.”

Listeners then heard a statement from the IDF spokesman which included the only mentions of the word ‘terrorist’ in the entire twelve-minute item.

Failing to tell listeners that at least three of those killed in IDF strikes were claimed as members by terror organisations, Marshall went on:

Marshall: “Well Israeli airstrikes have left at least six Palestinians dead. Just before we came on air I spoke to Majd Masharawi, a civil engineer in Gaza.”

Readers may recall that Masharawi recently featured (see ‘related articles’ below) in two other items of BBC content.

Masharawi: We couldn’t sleep the whole night yesterday. You just expect that you might be the next one. Can you imagine this feeling?”

Marshall: “So there was pretty continuous airstrikes, were there, through the night?”

Masharawi: “Literally all the night.”

Marshall: “And what can you do to protect yourself?”

Masharawi: “Well you can’t do anything. You don’t know where they are bombing and you can’t…you just have to stay with the family and protect them.”

Failing to clarify to listeners that – in contrast to the misleading impression given by Masharawi – Israeli forces issue advance warnings of strikes on their exclusively military targets, Marshall continued:

Marshall: “So there’s nowhere you can go? No shelters? Anything like that?”

Masharawi:”We don’t have shelters, you know.”

Marshall: “And today, is it quiet for the moment?”

Masharawi: “It’s more quiet than the night but they still…they still like targeting places in the south and north. And yesterday how it happened? I was journey to [travelled to] one of the sites yesterday in the north and 500 meters away I saw like a huge explosion and something is falling from the sky. So I didn’t know where to go and my legs just freeze and I received a phone call from my dad saying the war’s going to start; go back now.”

Marshall: “It’s not safe enough, I assume, for your children to go to school today?”

Masharawi: “No, no. My brothers and sisters didn’t go to school. Everyone is still at home. Even, even my dad he didn’t go to work.”

Marshall: “So at the moment you’re trapped in your house.”

Marshall: “And are you worried that there could be another war like there was in 2014?”

Masharawi: “Well this is a nightmare. I wish it will not be. And yesterday night I was crying like a kid. I was crying because I didn’t want war to start and I don’t want…I don’t want to lose faith that we will have peace.”

After those first six questions relating to the events of the previous 24 hours, Marshall ‘zoomed out’.

Marshall: “What do you think needs to happen for all this to stop?”

Masharawi: “What should happen? Our leaders should leave their places and they should give it to people who can lead us into better destinations. Not destinations of killing and losing people and just making a mess. A destination where we can…we people can have a better future and a better life.”

Marshall: “So you don’t believe that Hamas are doing a very good job?”

Marshall: So you don’t see yourself at the moment having…having a future?”

Marshall: “But my understanding was that you…you chose to come back to Gaza – is that right?”

Masharawi: “Yeah, I choose to come back because I thought I can create a change and I feel now like it’s like there is a very powerful thing over us that prevents us even from having a good life.”

Marshall: “But having come back to Gaza, you can’t leave again – is that what you’re saying?”

Masharawi: “No I can’t. Yeah, I can’t. I’m trying now for weeks to get a permit from Israel and they don’t give me. And I’m asking many people who promised to help young people in Gaza and no-one is responding.”

Marshall: “So what should other countries in the world be doing, do you think, to try to help bring this violence to an end?”

Masharawi: “Well at the end of the day people are showing solidarity which is very…like very nice of them: it’s really appreciated. But we want it more like real steps. We want people to stand and say we are not moving from here unless this will stop, because people are dying here in my country.”

Obviously listeners to that four-minute and twenty-second interview did not hear anything which would contribute to their understanding of the roots of the conflict or their appreciation of the fact that in this particular round of violence, Israeli civilians were being deliberately targeted by terrorist organisations while civilians in the Gaza Strip were actually receiving warnings of impending strikes against military targets in order to ensure their safety.

Julian Marshall next went on to speak an Israeli woman and that rather different interview will be discussed in part two of this post.

BBC Radio 4: nothing to see in southern Israel, move along to Gaza