The BBC's report on the Airbnb listings story excludes any mention of the company's business in other disputed territories. 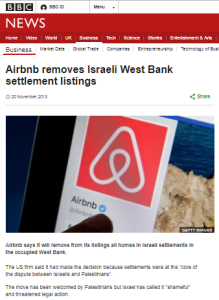 One hundred and twenty-three of the article’s 422 words summarised the announcement put out by the company while 129 words described subsequent reactions from the PLO’s Saeb Erekat, the Israeli tourism minister and a relevant Israeli organisation.

One hundred and fourteen words were given over to background information, including the BBC’s standard partisan mantra concerning ‘international law’:

“The West Bank settlements are considered illegal under international law, though Israel disputes this.”

Readers were also told that:

“The issue of settlements is one of the most contentious areas of dispute between Israel and the Palestinians.

More than 600,000 Jews live in about 140 settlements built since Israel’s occupation of the West Bank and East Jerusalem in the 1967 Middle East war.

The Palestinians see them as a major obstacle to peace and a barrier to a hoped-for Palestinian state on land which they occupy.

Israel says such an argument is a pretext for avoiding direct peace talks, and that the fate of settlements should be negotiated in accordance with peace accords signed with the Palestinians in 1993.”

Notably, despite having quoted Airbnb as saying that “…many in the global community have stated that companies should not do business here because they believe companies should not profit on lands where people have been displaced”, the BBC did not find it relevant to tell its audiences about the people displaced from places such as the Gush Etzion communities, Beit HaArava or the Old City of Jerusalem just nineteen years before its selected start-date for Middle East history.

Without clarification of the fact that a PLO representative has in the past threatened legal action against Airbnb, readers were told that:

“Airbnb has previously been criticised by Palestinian officials and human rights campaigners for allowing listings of homes to rent in Israeli settlements.”

While those so-called “human rights campaigners” remained unidentified by the BBC, readers were not informed that Airbnb does business in numerous other disputed locations (for example northern Cyprus, Western Sahara) or whether or not those same campaigners have “criticised” those operations.

Unsurprisingly, the BBC found it appropriate to cite one of its most frequently quoted and promoted political NGOs – including images.

“The decision was announced the day before Human Rights Watch was set to publish a report examining Airbnb’s business in the settlements.

The organisation praised Airbnb’s decision on Twitter, hailing it as “a breakthrough”.”

The BBC did not bother to clarify to its audiences that the said ‘report’ produced by the political NGOs ‘Human Rights Watch’ and ‘Kerem Navot’ is actually a political campaign focusing exclusively on Jewish Israelis which makes no mention whatsoever of Airbnb’s business in additional disputed locations around the world.

The NGOs and Funders Behind Airbnb’s BDS Policy (NGO Monitor)