The BBC continues to frame violent rioting as 'protests'.

Listeners to the BBC Radio 4 programme ‘PM‘ on November 23rd heard an item which was rather clumsily and confusingly introduced by presenter Jonny Dymond (from 26:03 here). 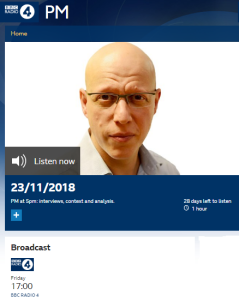 Dymond: “Nearly six thousand residents of Gaza have suffered bullet wounds over the course of this year as Israeli soldiers have attempted to drive them back from the tightly packed strip of land in which they live and southern Israel – the border between the two. Most of those injuries are to young men who have been hit in the leg – shot in the leg. All of them require medical assistance of course and doctors in Gaza have become pretty adept at treating such injuries, assisted by John Wolfe, a retired consultant vascular surgeon from St. Mary’s Hospital in West London. Our Middle East correspondent Tom Bateman reports.”

Over the past eight months we have repeatedly documented the fact that the BBC has downplayed or erased Hamas’ role in initiating, organising and facilitating the ‘Great Return March’ violent rioting along the border between Israel and the Gaza Strip.

As has also been recorded, the fact that a significant proportion of those killed during the violent rioting – including under 18s – have been shown to have links to Gaza Strip based terror factions has likewise been downplayed and ignored by the BBC. Violent incidents have been serially ignored and the BBC’s editorial approach to this story has been to portray it as one that is about ‘peaceful protesters’ killed by Israel’s armed forces.

The audio report produced by Tom Bateman adhered to that editorial approach.

Bateman: “[…] this British vascular expert is surrounded by Palestinian surgeons. For them, the delicate skills needed to operate on damaged arteries has become all the more urgent this year. Last Friday we waited outside northern Gaza’s main hospital. Young men, some with bullet wounds to the leg, were brought in from protests at the perimeter fence with Israel. The demonstrations began in March over a declared Palestinian right to return to ancestral homelands from the blockaded Strip. Israel sees them as a violent attempt to breach the fence, stirred up and exploited by Gaza’s militant leaders. It defends the use of live ammunition, pointing to attacks against its troops. Since March more than 170 Palestinians have been killed by Israeli fire. In July an Israeli soldier was shot dead by a Palestinian sniper. While the scale of the protests has lessened, each week still sees new casualties. This is another case coming in while the protests at the fence continue.”

A filmed version of the same report employs the same framing.

Bateman: “This is a conflict that has changed even more lives this year. Thousands of Palestinians in Gaza have suffered bullet wounds during protests at the perimeter fence with Israel. It has put intense pressure on Gaza’s hospitals. [….] Palestinians have protested since March, demanding a right to return to ancestral homelands from the blockaded Strip. Israel defends the use of live ammunition, pointing to violent attacks against its troops, stirred up – it says – by Gaza’s militant leaders.”

So as we see Tom Bateman has managed to produce two reports without mentioning Hamas by name and without clarifying the role of that terror faction and others in the organisation and facilitation of the weekly violent rioting. Bateman also failed  to clarify to audiences that the project with the self-proclaimed aim of having millions of people ‘return‘ to what he terms “ancestral homelands” – without explaining that he actually means Israeli territory – is designed to eradicate the Jewish state.

While the British surgeon remarked that “this volume of severe injuries is something that most countries never see” in both versions of the report, Bateman made no effort to explain to BBC audiences that those injuries could have been avoided had Hamas – which is also in charge of the local health system described by Bateman as “already under huge pressure” – not planned, encouraged, facilitated and financed this particular terror project.

In conclusion, BBC audiences heard and saw two ICRC approved reports on the work of a British surgeon which once again predictably erased context crucial for full understanding of the story.

Why did the BBC News website erase an accurate statement?

BACKGROUNDER: The Palestinian Claim to a “Right of Return”  (CAMERA)