A 22 year legal case comes to an end.

As has often been noted here – most recently in relation to the Airbnb story – according to the BBC’s chosen narrative, any place which fell on the Jordanian side of the 1949 ceasefire lines is ‘Palestinian land’ (regardless of the fact that the Armistice Agreement specifically stated that the ceasefire lines were not borders) and any community populated by Israelis in those areas is a ‘Jewish settlement’ in either ‘East Jerusalem’ or ‘the West Bank’ which is portrayed as being ‘illegal under international law’ regardless of its history.

There is no place at all in the BBC’s simplistic and politically partisan narrative for nuances such as the fact that Jews lived for centuries in the Old City of Jerusalem before being ethnically cleansed by the Jordanian army. Neither is there any room in that frequently promoted portrayal for facts concerning places such as Neve Ya’akov  or Gush Etzion where Jews legally purchased land years before the belligerent Jordanian invasion.

Last week a 22 year-long legal case came to an end. 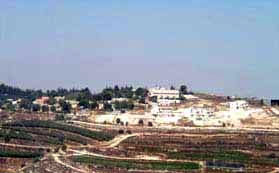 The JNF purchased the land in question in 1944 through a JNF subsidiary organization called Himnota. The Arab family who sold the land emigrated to South America.”

A kibbutz called Ein Tzurim was originally established on that land purchased in 1944 but it was destroyed in 1948 when Gush Etzion fell to the invading Jordanian army. Following the Six Day War, a new kibbutz named Rosh Tzurim was established in 1969 on the same site.

As reported on Hebrew language news sites, in 1996 Palestinians from a nearby village claimed ownership of the land and the case went to the district court. In 2016 the Jerusalem District Court ruled that the documents presented by the Palestinians were fake. The petitioners submitted an appeal to the High Court – with their legal counsel provided by the Palestinian Authority. The High Court judges ruled that the district court’s decision should stand.

Not only are BBC audiences highly unlikely to ever hear that story but – despite being obliged under the terms of its Charter to provide “impartial news and information to help people understand and engage with the world around them” – the corporation will doubtless continue to describe that area and others as ‘occupied Palestinian land’.

Looking beyond the BBC’s simplistic portrayal of Gush Etzion