Once again BBC audiences are denied information which would enhance their understanding of a story about recognition of Israel's capital city. 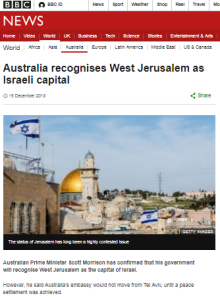 As has been the case in several previous articles relating to recognition of Jerusalem as Israel’s capital, a problematic backgrounder video by Yolande Knell dating from December 2017 was promoted in this latest report.

Also in common with similar previous reports, readers were told that:

“US President Donald Trump drew international criticism last year when he reversed decades of American foreign policy by recognising the ancient city as Israel’s capital. The US embassy was relocated from Tel Aviv to Jerusalem in May.”

The fact that the US Congress actually voted to recognise Jerusalem as Israel’s capital over two decades ago was yet again concealed from audience view.

Under the sub-heading “Why is the status of Jerusalem so contentious?” readers saw the background to the story portrayed thus:

“The status of Jerusalem goes to the heart of the Israeli-Palestinian conflict.

Israel regards Jerusalem as its “eternal and undivided” capital, while the Palestinians claim East Jerusalem – occupied by Israel in the 1967 Middle East war – as the capital of a future state.

Israeli sovereignty over Jerusalem has never been recognised internationally, and according to the 1993 Israel-Palestinian peace accords, the final status of Jerusalem is meant to be discussed in the latter stages of peace talks.

Since 1967, Israel has built a dozen settlements, home to about 200,000 Jews, in East Jerusalem. These are considered illegal under international law, though Israel disputes this.

In December 2017, UN member states voted decisively at the General Assembly in favour of a resolution effectively declaring US recognition of Jerusalem as Israel’s capital to be “null and void” and demanding it be cancelled.”

Similar or identical portrayals have often been seen by visitors to the BBC News website in the past; most recently in November 2018 and October 2018.

Obviously if the BBC’s audiences are to understand the background to this story they need to be told of the inclusion of Jerusalem in the territory assigned by the League of Nations to the creation of a Jewish homeland. They also need to be informed of the belligerent Jordanian invasion and subsequent ethnic cleansing of Jews who had lived in Jerusalem for generations from districts including the Old City in 1948, together with the destruction of synagogues and cemeteries, as well as the fact that the 1949 Armistice Agreement between Israel and Jordan specifically stated that the ceasefire lines were not borders.

Once again readers of this report found the BBC’s usual partisan framing of ‘international law’ and ‘settlements’ with no mention of the fact that some of the Jerusalem neighbourhoods it chooses to define as such were inhabited by Jews until the Jordanian occupation.

Since the BBC began covering stories concerning the recognition of Jerusalem as Israel’s capital in late 2016 – and particularly since the US announcement concerning its embassy’s relocation in December 2017 – the comprehensive background information which would enable BBC audiences to fully understand these stories has been serially withheld.

With every new announcement by a foreign government of recognition of Israel’s capital it becomes more and more obvious that the BBC’s chosen framing of the story is not intended to meet its obligation to “provide accurate and impartial news, current affairs and factual programming of the highest editorial standards so that all audiences can engage fully with issues across the UK and the world”.

Mapping the BBC’s branding of declarations on Jerusalem as ‘controversial’