Once again the BBC self-conscripted to an UNRWA campaign in 2018.

Among the topics (see ‘related articles’ below) that the BBC chose to promote during 2018 in a manner that went beyond ordinary reporting both in terms of the amount of content produced and adherence to standards of ‘due impartiality’ was that of cuts in US aid to Palestinians – particularly via the UN agency UNRWA.

Nearly two weeks before any official US announcement was made the BBC World Service radio programme ‘Newshour’ was already framing the topic for listeners in an item that purported to examine the question of “who would lose out the most if President Trump followed through on his threat to cut funding to the Palestinians?”

“As we see, listeners to this item heard three views in all – two from Palestinians and one from a think-tank fellow with a record of being less than neutral. No American or Israeli views were sought by the programme’s producers. Audiences were told that any cut in US aid to Palestinians would cause the Palestinian Authority to collapse with detrimental results for Israel, European and American interests and the Middle East peace process. They were twice told that the US president is ‘blackmailing’ the Palestinians.”

On January 16th the BBC News website reported that:

“The US is withholding more than half of a $125m (£90m) instalment destined for the UN relief agency for the Palestinians, American officials say.

It will provide $60m in aid to the UN Relief and Works Agency (UNRWA) but will hold back a further $65m.” 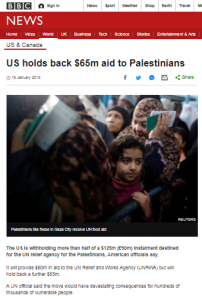 “While…relevant background was withheld, the BBC’s article did amplify reactions from former UN official Jan Egeland and the PLO. […] Obviously BBC audiences cannot reach informed opinions on this particular story so long as the BBC continues to refrain from providing them with the relevant background concerning the long-standing debate surrounding UNRWA that they have been denied for so many years.”

The next morning the top story in the various editions of the BBC World Service radio programme ‘Newsday‘ was described as follows:

“The US is withholding more than half of a $125m (£90m) instalment destined for the UN relief agency for the Palestinians, American officials say. It will provide $60m in aid to the UN Relief and Works Agency (UNRWA) but will hold back a further $65m.” 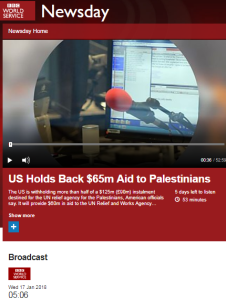 The interviewees heard by listeners were as follows:

“The majority of the opinions heard…were strongly critical of the [US] decision and the sole exception was in the contributions from Jonathan Schanzer of the Foundation for Defense of Democracies. […] Obviously that imbalance in itself compromises the BBC’s claim to produce impartial reporting “reflecting a breadth and diversity of opinion“. Moreover, listeners heard numerous inaccurate and misleading claims from both Gunness and Barghouti that presenters made no attempt whatsoever to challenge or correct. No attempt was made to raise any of the serious issues surrounding UNRWA’s functioning and agenda despite their clear relevance to the story.” 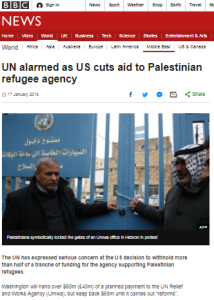 “…just 72 words in Yolande Knell’s 882 word report were devoted to the provision of superficial background information on UNRWA. […]  While content provided by UNRWA staffers Najwa Sheikh Ahmed and (former BBC employee) Chris Gunness makes up nearly half of Yolande Knell’s 882 word article, once again this PR item amplifying UNRWA’s campaign against the US administration’s reduced donation fails to provide BBC audiences with the full range of impartial information concerning the UN agency that is needed for broader understanding of the story.”

In February UNRWA’s commissioner-general, Pierre Krahenbuhl, was given a long slot on BBC WS radio.

“Obviously this interview was not intended to provide BBC audiences with information which would enhance their understanding of the criticism of UNRWA’s mission and performance. Rather, the BBC chose – not for the first time – to provide the UN agency’s head with a friendly platform from which to promote his PR campaign in a near monologue that went unchallenged in any serious manner.”

“UNRWA’s role in keeping millions of Palestinians in refugee status was not explained to listeners and neither was that of the Arab League.”

“To be honest, it is difficult to imagine how this report could be more unhelpful to BBC audiences trying to understand either the situation in the Gaza Strip, the reasons behind the US decision to withhold part of its voluntary funding of UNRWA or the role and record of UNRWA itself.”

In late August the BBC WS radio programme ‘Newshour’ once again presented preemptive framing of a US announcement that had not yet been made in a long item that included an interview with the Jordanian foreign minister. 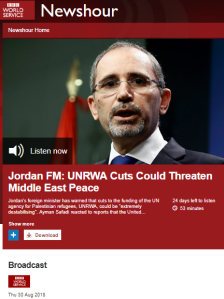 “This interview with a senior minister from a country where some 40% of UNRWA clients live could obviously have been employed to provide BBC audiences with much-needed enhancement of understanding of the background to the ‘UNRWA in financial crisis’ story that the BBC has been reporting since January. Unsurprisingly given the corporation’s record on this story, once again that opportunity was passed up.”

The US announcement on August 31st was covered in a written report published on the same day in which readers saw quotes from the Palestinian Authority, UNRWA spokesman Chris Gunness and the then PLO representative in Washington.

BBC News reporting on US aid cut to UNRWA – part one

“Once again BBC audiences did not see an explanation of the changes to UNRWA’s mission over the years which have created the situation in which the number of people registered as refugees has grown rather than diminished in 70 years.”

That report was replaced by another one the next day. 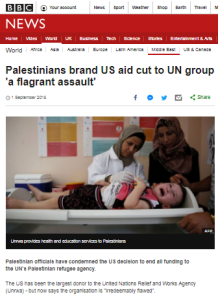 “…16.3% of the report’s word count was given over to criticism of the US decision from various Palestinian factions, including the PLO (together with a link) and the Hamas terror group. An additional 48 words were used to describe Palestinian denunciation of previous unrelated US Administration decisions. A further 13.7% of the report’s word count was devoted to amplification of statements from UNRWA’s spokesman Chris Gunness, meaning that in all, 30% of the article was devoted to informing BBC audiences of condemnations of the US move.”

“…BBC World Service audiences heard unchallenged UNRWA messaging together with promotion of Palestinian talking points in a long item which once again did little to contribute to their understanding of the background to this story.”

Also in September an edition of a BBC Radio 4 “ethical and religious” programme included an item billed “where politics and morality clash – Edward discusses the cut in funding for Palestinian projects by the US Administration”.

“Yet again BBC audiences were denied information concerning UNRWA’s problematic record and were given no insight into the background to its politically motivated perpetuation of the refugee issue. Yet again BBC audiences heard no discussion of why citizens of the Gaza Strip and PA controlled areas are classified as refugees and deliberately kept dependent on foreign aid.

However, in this item Radio 4 listeners heard more than an academic discussion. They heard a significant contribution from the “head of marketing and fundraising” at an NGO that is raising money for this particular cause – a cause that was repeatedly portrayed to the Sunday morning audience as the right “moral” choice.”

As the above examples show, the BBC’s coverage of this story was both generous and blatantly one-sided. While repeatedly providing platforms for UNRWA officials and supporters, the corporation made no effort to explain the issues at the root of the long-standing debate surrounding UNRWA that are the context to the story.

In other words, the BBC’s approach to this story, which ran for much of 2018, was to self-conscript to a political campaign rather than to provide audiences with the full range of information necessary for them to reach their own informed opinions on the topic.

Reviewing a BBC slap to the face of impartial journalism

Revisiting another of the BBC’s 2018 campaigns

0 replies on “Documenting BBC amplification of an UNRWA campaign”