A Palestinian 'government of national unity' exists only on the BBC News website. 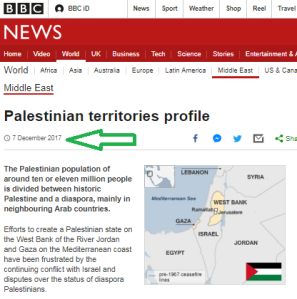 “The Fatah faction of the PLO ran the PNA until 2006, when Hamas won a majority in Legislative Council elections.

Uneasy co-existence between PNA President Mahmoud Abbas and a Hamas-led government led to violence between armed wings of Fatah and Hamas, culminating in Hamas seizing power in Gaza in June 2007 and President Abbas dismissing the government.

The two PNA areas were then run by the separate factions – the West Bank by Fatah, and Gaza by Hamas – until a government of national unity assumed control of Gaza public institutions in October 2017.” [emphasis added]

“2017 October – Hamas lets the Ramallah-based unity government take over public institutions in Gaza as part of a reconciliation process between the two rival administrations.”

While the BBC enthusiastically reported that ‘unity government’ story at the time, those statements obviously do not reflect Palestinian political reality.

Earlier this week Fatah accused Hamas of arresting a large number of its members in the Gaza Strip.

“Palestinian Authority President Mahmoud Abbas’s Fatah faction claimed on Monday that Hamas has arrested 500 of its activists and officials in the Gaza Strip.

Fatah spokesmen said the arrests were designed to prevent the men from celebrating the 54th anniversary of the launching of its first attack against Israel.”

Although Hamas denied the allegations saying that “only 38 senior Fatah men were summoned for questioning”, as the Jerusalem Post reports the row continues.

“The Hamas crackdown has enraged Fatah leaders in Ramallah. Palestinian Authority President Mahmoud Abbas, who also serves as chairman of Fatah, launched a scathing attack on Hamas. In a speech, Abbas strongly denounced the Hamas measures against his supporters in the Gaza Strip. He even went as far as hinting that Hamas was working for Israel. “Those who prevent us from marking this occasion are spies,” he said, referring to Hamas. “We have been suffering from the spies here and there, and they will end up in the dustbin of history.” […]

Several other Hamas leaders and spokesmen reacted with outrage to Abbas’s charge. They used the words dictator, senile, mentally unstable, traitor, collaborator and liar to condemn the Fatah leader. The Hamas representatives said that Abbas was the real collaborator because of the security coordination between his security forces and Israel in the West Bank.”

Prominent analyst Khaled Abu Toameh went on to report that:

“Fatah officials in the West Bank said on Wednesday that Hamas’s actions against their men indicate that there’s no chance that the two parties could ever resolve their differences. The officials pointed out that the Egyptians have given up on their repeated attempts to end the Hamas-Fatah rift.

“That’s it: There will be no dialogue with Hamas,” said Hussein al-Shiekh, a senior Fatah official in the West Bank. “We have notified Egypt and Qatar that their efforts to achieve reconciliation [between Hamas and Fatah] have reached a dead end.” […]

Until recently, it appeared as if the Egyptians were on the verge of reaching another “historic” reconciliation deal between Hamas and Fatah. The two parties have signed several reconciliation accords in the past 11 years, but none have been implemented. The last reconciliation agreement was signed in Cairo in October 2017. That accord, too, has yet to be implemented.

Judging from the actions and words of Fatah and Hamas, it now seems that the chances of ending the split between the West Bank and the Gaza Strip are virtually zero.”

Clearly it is high time for an update to bring the BBC’s ‘Palestinian territories’ profile into step with reality.