Is a BBC Two travel show about to take a political turn?

BBC Two has a programme called ‘See Hear’ which is described as a “Magazine for the deaf community highlighting the issues affecting the community”. The programme has in the past included a series called “On Tour” in which a deaf presenter has visited foreign cities in order to “explore deaf culture in other countries” and to ask:

“What is life like for the local deaf community and what are the highlights for deaf travellers seeking out a short city break?”

“Nadeem Islam visits Reykjavik in Iceland, the land of ice and fire. The birthplace of the legendary Vikings, who pillaged and plundered their way around the world, today’s Icelandic people are more laid back – but there are still living, breathing deaf Vikings around – and Nadeem is going to meet one.

Nadeem experiences a dip in one of the hot springs that are dotted around Iceland’s mountainous landscape, watches a geyser erupt, tries on a few animal furs, enjoys a spot of knitting, does some whale watching and tastes one of the most revolting foods ever – fermented shark fat!

Oh, and let’s not forget to mention Nadeem’s trip to the world-famous penis museum!”

“Nadeem Islam visits Rome in Italy, also known as the Eternal City, to see what sights there are for deaf people to see. Starting with a guided scooter tour, Nadeem also meets the deaf signing guides who work at the Colosseum, and imagines being a deaf gladiator thousands of years ago.

Nadeem then has the opportunity to spend some time with one of the most powerful deaf men in Rome – Roberto Wirth, the proprietor of the five-star Hotel Hassler. Rome is a city where the inhabitants express themselves freely through gesture and body language – but do deaf people get equal status? With the campaign for legal recognition of Italian Sign Language still ongoing, it is a big issue.

Nadeem then rounds off his trip with a visit to One Sense, a deaf-owned restaurant, and gets to try his hand at a spot of Italian cuisine!”

The episode scheduled to be aired on the morning of January 16th is titled “On Tour: Tel Aviv” and its synopsis suggests that viewers may see a departure from the disabilities and travel genre. 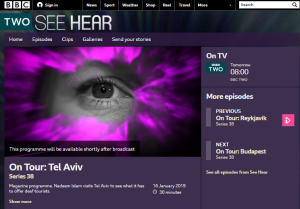 “Nadeem Islam visits the city of Tel Aviv in Israel, also known as The Miami of the Middle East. Wandering the sunny boulevards and beaches with his deaf Israeli guide Omer, they take in the beautiful Bauhaus architecture and a show at the famous Nalaga’at theatre of the deafblind. Nadeem has a Muslim background, and Omer is Israeli – will international signing be a bridge for them to meet in the middle and discuss the issue of Israel and Palestine?

Nadeem also takes on a couple of deaf volleyball champions, meets a deaf Holocaust survivor, learns the Israeli fingerspelling alphabet, and joins Tel Aviv’s Pride march – one of the largest in the world!” [emphasis added]

The BBC Academy’s ‘style guide’ of course tells BBC journalists that “in day-to-day coverage of the Middle East you should not affix the name ‘Palestine’ to Gaza or the West Bank – rather, it is still an aspiration or an historical entity”.

Remarkably BBC Two appears to believe that this particular episode of its half-hour travel show should include a political discussion simply because its British presenter “has a Muslim background”.

Now there’s a stereotype for you.