In which the BBC World Service discusses whether an official authority in a foreign country "should be stripped of its monopoly".

In recent months the BBC World Service radio religious programme ‘Heart and Soul’ has aired several editions described as ‘Gatherings’ involving a panel and audience discussion to “explore questions of faith shaping futures around the world”.

In September 2018 the programme visited the United States, asking “What role do black churches have in the fight for social justice today?”. A November 2018 edition of the programme was billed “Nuala McGovern is in Rome with young Catholics from across the globe to discuss issues such as sexuality, leadership in the Church, and the role of women”.

On January 12th the programme’s latest edition – titled “Marriage in Israel” – was broadcast from Jerusalem. 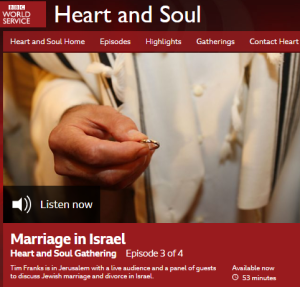 “Many young Jewish people living in Israel feel religion has too big an influence over their private lives. Numerous aspects of life are governed by a council made up of orthodox rabbis called the Rabbinate. They decide who is and isn’t Jewish and by extension who can and can’t marry.

Supporters of the organisation say this helps preserve Jewish identity. Critics say it means thousands of people who are not deemed ‘Jewish enough’ can’t marry each other, forcing couples to leave the country to have a ceremony that will be recognised by the authorities when they return home.

The religious monopoly on marriage also means Jews cannot marry non-Jews and as the council of orthodox rabbis rule on divorce for every married couple in Israel, many say this disadvantages women.

Tim Franks is with a live audience and a panel of guests to discuss whether the Rabbinate should be stripped of its monopoly, or whether the current rules protect the identity and values of the Jewish faith.

This special Heart and Soul Gathering from the BBC World Service is the third programme in a series of faith-based community discussions.” [emphasis added]

Obviously debate on that topic is of relevance solely to Israelis and more specifically – given that the discussion was conducted in English with contributing members of the panel and the audience mostly coming from the very small proportion of Israelis for whom English is a native language – to any BBC World Service radio listeners among roughly half of the Israeli population who describe their English language skills as fair or good.

Readers can hence judge for themselves the objectives and value of the worldwide broadcast of a nearly hour-long English language discussion of internal Israeli affairs involving a presenter and production team flown in for the occasion.