The BBC continues to promote an unverified claim concerning the 2006 Lebanon war.

On the evening of January 17th an article titled “Lebanon arrests US man for crossing illegally from Israel” appeared on the BBC News website’s ‘Middle East’ page. 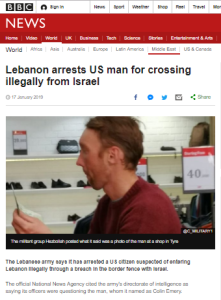 While the account of that still sketchy story is much the same as that seen in other media reports, the BBC also found it appropriate to add the following unrelated information.

“Tensions have been high in the region in recent weeks, with the Israeli military launching an operation to destroy six “attack tunnels” under the border that it says were dug by Hezbollah. Hezbollah has not commented on the tunnels.”

Apparently the BBC is still not convinced that Hizballah dug those cross-border tunnels or of their purpose. Yet again however the corporation refrained from providing audiences with an alternative explanation for tunnels hundreds of meters long quarried through solid limestone under the international border by a terror group dedicated to Israel’s destruction. And once again the BBC inaccurately stated that the terror group “has not commented” when in fact Hizballah’s second in command did just that.

The article closed with the following claim:

“Hezbollah and Israel fought a war in 2006 in which more than 1,125 Lebanese, most of them civilians, and 159 Israelis, including 43 civilians, were killed.” [emphasis added]

While the Lebanese authorities did not differentiate between civilians and combatants during the 2006 war, Lebanese officials did report even before the conflict was over that some 500 of the dead were Hizballah personnel and UN officials gave similar figures while Israeli estimates stand at around 600 (with 450 identified by name: see page 55 here).

In August 2006 the BBC News website acknowledged that “there are no reliable figures” for the number of Hizballah combatants killed in the war that had just ended at the time. Nevertheless, the BBC now promotes a narrative that portrays Lebanese casualties during the 2006 war as “mostly civilians” despite there being no evidence of its having been able to independently verify that claim.

An overview of BBC reporting on Operation Northern Shield