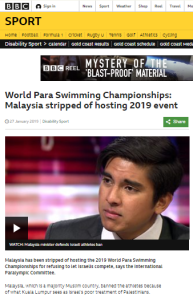 The article originally presented the background to the story thus:

“Malaysia, which is a majority Muslim country, banned the athletes because of what Kuala Lumpur sees as Israel’s poor treatment of Palestinians.

The Israeli foreign ministry condemned the decision and accused Malaysia of anti-Semitism.”

However, as noted here at the time, the foreign ministry’s statement actually referred to the antisemitism of Malaysia’s prime minister rather than the country as a whole:

“This is shameful and totally opposes the Olympic spirit. Israel condemns the decision, inspired no doubt by Malaysia’s PM Mahathir [Mohamad]’s rabid anti-Semitism,” the ministry said in a statement. “We call upon the International Paralympic Committee to change this wrong decision or change the venue of the event.”

BBC Watch submitted a complaint on that point and the response received reads as follows:

“Thank you for getting in touch about the BBC Sport article ‘World Para Swimming Championships: Malaysia stripped of hosting 2019 event’.

We’ve raised your concerns with the BBC Sport website editors, who have reviewed your complaint and the article in question. They have now changed the article, and sincerely apologise for the error.

Many thanks once again for bringing this to our attention.”

The inaccurate claim has now been removed from the relevant section of the report.