The background to an incident previously reported on the BBC News website emerges.

On November 13th 2018 the BBC News website published a report which included the following statements: 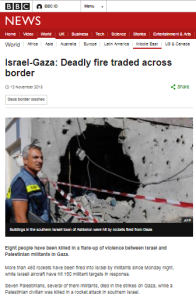 “…the Israel Defense Forces (IDF) carried out what it called a wide-scale attack against military targets belonging to the Hamas and Islamic Jihad groups.

It said they included Hamas’s military intelligence headquarters in northern Gaza and “a unique vessel” in a harbour in the south of the territory.

The building housing Hamas’s Al-Aqsa TV was also bombed after being evacuated. The IDF said the outlet “contributes to Hamas’s military actions”.”

A report published by the Israeli Security Agency on February 13th clarifies the background to that quoted IDF statement concerning the strike on the Al Aqsa TV building.

“The Shin Bet security service on Wednesday accused the Palestinian Al-Aqsa broadcaster and Gaza-based journalists of acting as agents of the Hamas terror group’s military wing in an effort to recruit young Palestinians with Israeli ID cards to carry out terror attacks inside Israel.

According to the security service, the Al-Aqsa television station was used to pass clandestine messages to Hamas operatives in the West Bank and East Jerusalem, using quotes from the Quran or subtle gestures by the presenters. […]

In one case, a 21-year-old from the Hebron suburb of Yatta was “asked by Hamas operatives in the [Gaza] Strip to carry out a suicide bombing with an explosive vest on a bus in the city of Lod,” the Shin Bet said. […]

The Shin Bet said the recruitment plot was a key factor in the decision made by the Israel Defense Forces to bomb Al-Aqsa TV’s headquarters in Gaza in November. […]

Shortly after the razing of the station’s building, the Hamas-affiliated outlet appeared poised to close, but was kept on air at the last minute because of an influx of money from the terror group.

Hamas political chief Ismail Haniyeh declared in a statement that Al-Aqsa TV’s broadcast would not be halted. He also said a “clear and direct decision” was made to keep the channel on air, without elaborating.”

During the November 2012 conflict BBC staff accused Israel of “targeting journalists” when a communications antenna on the roof of the building used by Al Aqsa TV (which was designated in 2010 by the US Treasury Department) was struck by the IDF.

Whether or not BBC audiences will be provided with any coverage of Hamas’ effort to recruit terror operatives with the help of ‘journalists’ working for its TV station which is the background to the reporting it produced last November remains to be seen.

0 replies on “Revisiting a BBC report from November 2018”