The BBC is good at publishing items about conspiracy theories but not nearly so good at avoiding them itself.

Once in a while the BBC produces content relating to the topic of conspiracy theories – for example here, here, here and here.

The latest item in that genre was commissioned from an academic contributor from Oxford University and it appeared on the BBC News website on February 12th under the title “Why so many people believe conspiracy theories”.

Given its long-standing interest in the topic, one would of course assume that the BBC would by now be able to recognise conspiracy theories for what they are and avoid promoting them – and the people who peddle them – in its own content. 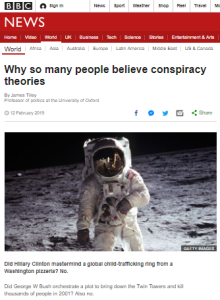 One prime example of BBC promotion of conspiracy theories is its relentless amplification – most recently in November 2018 – of the notion that Israel poisoned Yasser Arafat. In November 2013 alone visitors to the BBC News website saw nine separate reports which amplified that conspiracy theory.

Another example is the BBC’s amplification of the dangerous notion that Israel intends to change the status quo on Temple Mount and even destroy the al Aqsa mosque.

In 2015 and 2016 BBC audiences saw amplification of the ‘Mossad stole my shoe’ conspiracy theory. BBC Monitoring has amplified conspiracy theories found in Middle East media and on social networks.

The BBC has amplified Middle Eastern conspiracy theories pertaining to wildlife and in June 2016 the BBC News website promoted a conspiracy theory formulated by a Bangladeshi official.

A 2007 BBC report promoting the notion that “Israel itself was behind” the Entebbe hijacking is still available online.

In July 2018 the BBC amplified misinformation concerning the ‘White Helmets’ put out by Russia and the Syrian regime – despite having previously categorised it as conspiracy theory.

Conspiracy theorists are not considered too outlandish to be quoted or interviewed by the BBC and BBC phone-in shows do not eschew callers who promote conspiracy theories either.

In December 2015 BBC Radio London allowed a phone-in conspiracy theorist thirteen minutes of air-time and the same station repeated the exercise – in the name of ‘free speech’ – just months later.

“In relation to the Brussels attack two days previously, from around 22:17 ‘Steve in Streatham’ told listeners that:

“This is a terrorist false flag. Anyone who knows about false flags will know that these covert operations include Israel’s Mossad, the CIA and MI5 to blame other countries for their agenda in the Middle East and this is what’s going on time and time again. […] Those Zionists out there that are doing all this, they wanna blame certain sections of people to achieve their agenda of taking over the Middle East….””

So before the BBC publishes its next article purporting to inform audiences on the topic, perhaps it should take a long look at its own record of mainstreaming a variety of Middle East related conspiracy theories and seriously consider the question of how that practice contributes to meeting its obligations to audiences.

The BBC and “a politer version” of antisemitic conspiracy theory