Relating to an address given by the UN High Commissioner for Human Rights, Michelle Bachelet, in Geneva on the same day, 51% of the 335-word report was devoted to one topic.

“She also criticised Israel over its blockade of Gaza, and said she regretted Israel’s “immediate dismissal” of a report by a UN Human Rights Council commission of inquiry, “without addressing any of the very serious issues raised”.

The experts investigated the deaths of 189 Palestinians and said they found reasonable grounds to believe that Israeli snipers had shot at children, medics and journalists, even though they had been clearly recognisable as such.

“All parties concerned should exercise restraint as the date of March 30 approaches,” Ms Bachelet said, referring to the first anniversary of the start of the Palestinian protest campaign.

The Israeli government said the report was “hostile, mendacious and biased against Israel”. It has said its security forces have only opened fire in self-defence or on people trying to infiltrate its territory under the cover of the protests.” 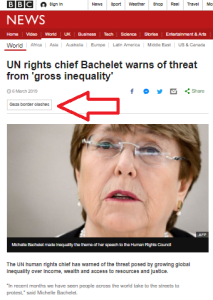 Given the article’s focus on Israel, readers may understandably have assumed that Ms Bachelet’s speech – which lasted over half an hour and included over four thousand words – concentrated primarily on that country.

However, the section of the address highlighted (in part) by the BBC in fact made up just 5.7% of the UN Commissioner’s speech and the BBC did not bother to inform readers that, as noted by the Times of Israel:

“A transcript of Bachelet’s speech made no mention of Palestinian violence and breaches and destruction of the Israel-Gaza border fence during the protests.”

In the 49% of the article not relating to Israel, the BBC names four other countries: Sudan, Haiti, France and Venezuela. Although Ms Bachelet’s address related to numerous other countries too, BBC audiences were told nothing of her comments on Zimbabwe, Nicaragua, Saudi Arabia, Turkey, China, Myanmar, Syria and others. Neither did they see any reporting on her comments relating to migration and women’s rights which were more extensive than her criticism of Israel.

Once again the BBC’s disproportionate focus on Israel, which leads to the failure to meet its own editorial guidelines on due accuracy and impartiality, is in full view.