A BBC religious affairs programme is once again out of its depth.

The item relates to a political story taken rather more seriously by the foreign press than the Israeli public which emerged in an April 6th Channel 13 interview with Israel’s prime minister. During that interview Netanyahu was asked why, during his 2015-2019 term of office, he had not annexed Gush Etzion or applied Israeli law to Ma’ale Adumim. Avoiding the word annexation, Netanyahu replied that the topic is under discussion and that he intends to apply Israeli law to Israeli communities in Judea & Samaria during his next (potential) term.

While no such action is likely to happen before the US presents its proposals for an agreement between Israel and the Palestinians (if at all, given that Netanyahu has in the past repeatedly scuppered such efforts when advanced by other MKs), Netanyahu’s remarks were presented to BBC audiences as a “vow” to “annex settlements”.

Presenter William Crawley introduced an interviewee who, on the same programme, has in the past shown herself to be less than reliable on Israel related stories. [emphasis in italics in the original, emphasis in bold added] 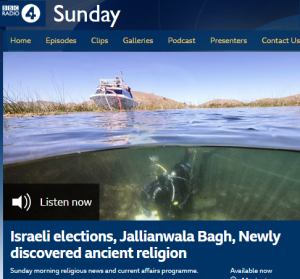 Crawley: “This Tuesday is election day in Israel and prime minister Benjamin Netanyahu may have advanced his own chances of success with his surprise announcement last night that, if re-elected, he will annex Jewish settlements in the occupied West Bank. Jordana Miller is a foreign correspondent for ABC News based in Jerusalem. She joins us now. […] Did anyone see this coming?”

Miller: “I can tell you for those of us who’ve been covering Benjamin Netanyahu for years, we knew there was still gonna be something he was gonna offer to voters before Tuesday. We weren’t sure exactly what but here it is. He is now vowing to annex parts of the West Bank which would be a major change in Israeli policy and it would bring, you know, millions of Palestinians under Israeli law which, you know, is a very grey…their status as it is is under a very grey kind of…eh…cloud.”

By the time Miller claimed that what she described as a ‘vow’ to “annex parts of the West Bank” would lead to “millions of Palestinians” being brought under Israeli law, the government minister Israel Katz had already explained to a local radio station that not one Palestinian would be annexed in the event of application of Israeli law to the Israeli communities in Judea & Samaria.

Crawley made no effort to explain to listeners that – despite his interviewee’s assertion – “millions of Palestinians” do not live in the “Jewish settlements” to which he referred in his introduction and he refrained from clarifying that – in contrast to her additional inaccurate claim – the status of the vast majority of Palestinians in Judea & Samaria is not “under a very grey kind of cloud” because they are in fact Palestinian Authority citizens living in Palestinian Authority controlled areas.

Miller: “So this would be very complicated and I don’t believe he will actually do it ahm…but this is what he’s doing to kind of rally his base. He is really down in the polls and tied in a few, maybe by one and he needs to really get people to the ballot and that’s – to the ballot box – that’s what he’s doing.”

Crawley: “And I suppose this, from his point of view, might be a helpful distraction from the corruption scandals that have been engulfing him recently.”

Miller: “That’s right. The attorney general announced some weeks ago that he does plan to charge Netanyahu on bribery, fraud and breach of trust in three separate cases. But the really interesting thing is that it has seemed to barely register with Israeli voters. They simply don’t seem to care that much. At the top of their list are security concerns. Ah…from the north eh…that border with Syria which they fear Iran is moving into and in the south with the Islamic terror group Hamas and the economy. But the corruption charges really, in polls we’ve seen it comes, you know, in the top ten it comes in the bottom half for voters.”

Crawley did not bother to point out to listeners that – in contrast to the impression given by Miller – the attorney general’s final decision concerning charges against Netanyahu will only be made after pre-indictment hearings which will take place after the election.

Crawley: “If this annexation did go through on the re-election of prime minister Netanyahu what would that mean for the Middle East peace process?”

Miller: “Well it would just be another severe blow for the Palestinians and they have been dealt many blows over the last…err, you know, almost two years under President Trump. So this would be I think…I think it would cause massive riots across the West Bank and of co… [cut off] harsh condemnations in the Arab world.”

Apparently not comprehending the question, Miller went on to give an account which few listeners would have understood.

Miller: “Well that’s been another fascinating thing about this election. Usually the ultra-orthodox parties hold a lot of power because they are some of the most powerful small parties and anybody who wants to be prime minister has to negotiate with them. But this year one of the traditional ultra-orthodox parties polling very low and what we see instead is the rise of the national religious parties in the middle: people who have broken off to support Israel’s minister of education who’s one of Benjamin Netanyahu’s big rivals. There’s another party called the Identity party headed by a national religious leader who’s advocating for separation of religion and state and who wants to legalise marijuana. So we are seeing a very different religious party or centre coming to the fore and they will have a much greater impact likely on creating more separation between church [sic] and state because they are not part of a kind of isolated ultra-orthodox community. So it’s interesting.”

Obviously the inaccuracies in this item mean that it contributed little to Radio 4 listeners’ understanding of this badly presented and as yet entirely speculative story.