The day after the general election in Israel – April 10th – listeners to BBC radio stations heard commentary from the BBC’s chief international correspondent Lyse Doucet who had been ‘parachuted’ in (along with Martha Kearney) to cover the event.

That day’s edition of the BBC Radio 4 ‘Today’ programme included an item (from 1:33:13 here) during which listeners again heard Doucet claim that the election had been called by Netanyahu alone. [emphasis in italics in the original, emphasis in bold added]

Doucet: “But in Israel […] it’s not just about winning the election; it’s winning the battle to form a new coalition. And the numbers look like it is the Right-wing, that the prime minister’s been wooing ever since he announced this election campaign, that he looks set to be the man who can do the job. But the arithmetic is still complicated. There’s…Israel also gives a new name to horse trading and electoral promises and electoral…ah…pulling back promises. So we have to wait and see. It’s not going to be straightforward.”

Kearney: “And what are these smaller parties like – the kinds that Benjamin Netanyahu are talking to?”

Doucet: “Let me say another thing about this election. This has told us two things about Israel. One is that in a way Benny Gantz and Benjamin Netanyahu both won and lost. Perhaps Benjamin Netanyahu will get to stay in power, get to try to avoid those indictments on corruption and fraud, but he has been…trounced in a way by Benny Gantz. A total newcomer to politics has surged ahead to show Israelis that there is an alternative. So it is in a sense a victory for Benny Gantz but also for the electoral landscape. The far-Right parties who also were the newcomers – people had thought that they may be the kingmakers. As the votes show now they did not enter…they’re not going to enter the Knesset; the parties who were condemned here by many Israelis as being racist and homophobic.”

As we saw in a previous post, Doucet had likewise referred to unnamed “far Right-wing racist parties” – i.e. more than one – in a report the day before even though until that point the BBC had confined itself to categorising one party – ‘Otzma Yehudit’ (Jewish Power) as racist.

A report from Doucet was also aired in the April 10th afternoon edition of the BBC World Service radio programme ‘Newshour’ (from 00:44 here) and the same claim was repeated. 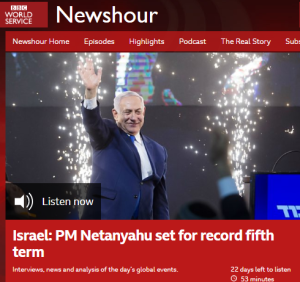 Doucet: “This is a man [Netanyahu] who managed to win again even though indictments are looming on three big charges of corruption, bribery and breach of trust. But the attorney general is still expected to press charges and Israel now does not have any legislation which says you can’t indict a sitting prime minister so he’s going to want to have politicians who’ll say ‘well no, you can keep governing even though you’ll have to fight those indictments; it’ll go on in the background but please, Benjamin Netanyahu, keep ruling us’ and that seems to be the message from the political electorate which is moving to the Right – not the far Right. Some of the new far Right parties didn’t manage to make it into the Knesset and some Israelis here see that as a victory for democracy. These were parties described as racist and homophobic.”

So which “new”, “far Right”, “racist and homophobic” parties (plural) was Doucet talking about? The answer to that question was revealed in the evening edition of ‘Newshour’ (from 34:12 here) presented by Tim Franks.

Doucet: “…it was said that he [Netanyahu] called this election nine months earlier [sic]. He was trying to preempt the attorney general who basically would not be preempted. He came out with his report on the three corruption cases where the prime minister is facing likely indictment before the elections. […] Israel currently doesn’t have any laws which say that you can [sic] indict a sitting prime minister. He was hoping for one of two things: either that there would be a…some kind of acceptance by the parties in his coalition that he can continue to govern even after he’s indicted – in other words while the political [sic – legal] processes take their course.” […]

Franks: “And Lyse, it was said of his last coalition that it was the most Right-wing in Israel’s history. What were…how’s the new one going to shape up?”

Doucet: “There were worries before the election that it would not just be a Right-wing but a far Right-wing government and that prime minister Netanyahu was reaching out to new parties just formed which were racist and homophobic – so much so that even members of the Democrats in the United States and AIPAC, the American Jewish organisation, said that they were not consistent with Jewish values. The way the votes have turned out they did not cross the threshold – at least two of the far-Right parties – to take seats in the senate [sic] so maybe more of the more familiar Right-wing and religious parties which will form part of his coalition.”

The one party which garnered criticism from AIPAC and others is ‘Otzma Yehudit’ which – contrary to Doucet’s claims – is not “new” or “just formed” but has been in existence since 2012. In this election that party ran together with two others on a list called the Union of Right-Wing Parties (URWP).

Where Doucet got the idea that the URWP “did not cross the threshold” is unclear. The exit polls conducted by the three Israeli TV channels predicted that the list would secure between four and five seats in the Knesset and the final count gave it five seats.

One new party which did not gain enough votes to secure any seats in the Knesset was ‘The New Right’ party headed Naftali Bennett and Ayelet Shaked. Nobody has branded that party “racist and homophobic”.

Obviously the BBC’s chief international correspondent did not bother to familiarise herself with the differences between ‘Otzma Yehudit’ and ‘The New Right’ before giving BBC audiences her ‘expert analysis’. Clearly too she did not make any effort to check out the facts before repeatedly telling listeners around the world that there are “racist and homophobic” parties – plural – in Israel.

We have seen before – especially during conflicts – that journalists ‘parachuted’ in to Israel to cover a major event often produce low-quality and inaccurate reporting due to a lack of familiarity with the subject matter. Nevertheless, this is not some junior reporter but the BBC’s chief international correspondent and one would expect that if the BBC is going to go to the expense of flying in extra journalists to report a specific story, it would at least ensure that they are familiar with the basic facts in order to ensure that the corporation’s funding public gets accurate reporting.