To say that Israel bombed the headquarters of the Confederation of Disabled People is technically accurate, and highly misleading. It was not the target, it was only one single office in a multi-story building, and the target was (at least) Fatah operatives, and possibly other terror related spaces in the building.

This is one of the ‘Photos of the Week published in the Guardian on May 11th: 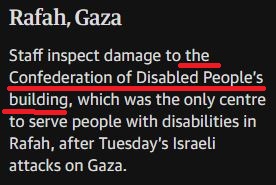 However, as blogger Elder of Ziyon wrote in his fisking of the photo, the Guardian’s claim is highly misleading. The “Confederation of Disabled People’s” organisation was not the target, but only a single office in the multi-story building.  The target appeared to be terrorists operating out of the building, and, in fact, all of the three people killed in that IDF attack were Fatah operatives.