James Landale produced two reports on Israeli 'distrust' of the EU. What did he ignore?

Using the Eurovision Song Contest as a hook (and tag) another BBC reporter apparently in Tel Aviv for that event – diplomatic correspondent James Landale – published an article titled “Why Israel eyes the EU with distrust” on the BBC News website on May 20th. 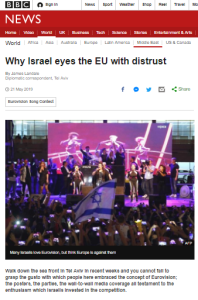 Landale also produced an audio version of that report which was aired on BBC Radio 4’s ‘Today’ programme on May 18th (from 01:48:35 here) and the central messaging of both reports is the same.

“…Israel’s love of Eurovision the competition has also illustrated its more ambiguous attitude to Europe the continent.

If you speak to Israelis, some will tell you how Europe is their biggest trading partner, how they love going on holiday there and of their many ancestral family connections.

Yet many also say they see Europe as a source of anti-Semitism, a place where the Holocaust is becoming less prominent in the minds of a new generation of young people.

And many also see Europe as a source of what they see as unfair criticism for their government’s policies towards Gaza and the West Bank, coupled with a failure to understand Israel’s existential security threat. […]

Many see it as an organisation that has taken sides in their conflict with the Palestinians, others condemn it for providing aid that sometimes ends up in the hands of groups like Hamas, which the EU regards as a terrorist organisation. […]

This sentiment is fanned by Israel’s recently re-elected prime minister, Benjamin Netanyahu, who before Christmas described the EU as “hostile and hypocritical”.”

“European diplomats take some of this criticism with a pinch of salt and say the EU is a “useful whipping boy” for Israel at a time when it is so close to the Trump administration.”

However Landale made no attempt to delve further into how the generalised opinions he presented may have come about. Had he done so, he could have told BBC audiences about an issue that the corporation has long avoided: the fact that the EU has for years carried out illegal construction at sites in Area C.

Under the terms of the Oslo Accords, Area C is of course under Israeli control and that includes planning permission. The status of the area is, according to that EU backed agreement, subject to final status negotiations between Israel and the Palestinians. Nevertheless, a European Commission report from September 2014 openly stated that “the European Union and Palestinian Authority are actively promoting planning and construction in Area C, which, if successful, will pave the way for development and expansion of the Palestinian Authority’s control over Area C.”

Another example of such EU activity has come to light in Gush Etzion.

““Over the course of the past two years, activists from the Arab town of Al Khader, backed by P.A. and European Union funding, occupied the ruins of two ancient shomerot  (watchman’s huts) – primitive stone structures used by passing shepherds or farmers as shelter from the elements—that dot the landscape in the Jerusalem and Sataf areas. They renovated these abandoned structures and turned them into homes – and from that point, in very short order, totally new structures have been added in the surrounding area.”

The signs posted on the refurbished buildings, proudly bearing the European Union emblem, explain that the site is an ancient village – Shoshkhalah – despite the fact that aerial photos paint a completely different picture. In the past two years, more than 15 homes have been built in this “village,” each connected to solar power infrastructure and water tanks paid for by the Europeans.

Analysis of aerial photos from 1967, as well as historic maps dating back to 1880, prove that there was never any settlement of any kind at the site.”

Interestingly, while BBC audiences can by now probably recite the corporation’s mantra on Israeli ‘settlements’ and ‘international law’ by heart, the repeated appearance of Palestinian/EU constructed outposts under the guise of ‘humanitarian assistance’ is not considered newsworthy – even by a senior BBC correspondent purporting to cast light on Israeli attitudes towards Europe.

Revisiting another of the BBC’s 2018 campaigns