The day after we noted on these pages that BBC audiences had heard nothing about a two year-old self-awarded pay rise to Palestinian Authority cabinet ministers, the BBC News website published a report headlined “Anger at Palestinian ministers’ secret 67% pay rises”. 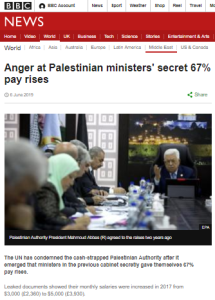 BBC audiences finally learned – three months on – that a new PA prime minister had been appointed – but were not told that the pervious one had resigned in January.

Prime Minister Mohammad Shtayyeh had agreed to end the practice, he added.

Mr Shtayyeh – an economist who took office in April – has also ordered an investigation, during which ministers will reportedly receive half their salaries.”

The BBC did not clarify that, as reported by AP, most PA employees are currently only being paid half their salaries:

“Newly appointed Prime Minister Mohammad Shtayyeh, a longtime adviser to Abbas, has suspended the pay raises and referred the issue to Abbas “to review it and take legal measures.” While the issue is investigated, ministers will receive half their salaries, like most other government employees, according to government spokesman Ibrahim Milhim.””

Notably, the BBC completely avoided the topic of the reaction on the Palestinian street to the news of the secret pay rises.

Readers were provided with a link to a recent interview with Shtayyeh.

“In an interview with the New York Times published on Wednesday, Mr Shtayyeh warned that the PA was in such dire financial straits that it was “in a collapsing situation” and could be bankrupt by July or August.”

The BBC’s explanation of that claim focused on two factors, the first being tax revenue transfers from Israel.

“The financial crisis was exacerbated this February by a dispute with Israel over the transfer of tax and tariff revenues it collects on the PA’s behalf.

Israel announced it would freeze the transfer of about $139m (£109m) – an amount it said was equal to that paid by the PA in 2018 to families of Palestinians jailed by Israel or killed while carrying out attacks.

Israeli officials say the payments incentivise terrorism. But the PA insists they are welfare payments for relatives of prisoners and “martyrs”.

The PA responded to the freeze by refusing to accept any further Israeli revenue transfers, which account for about half its budget.”

The second factor cited is the US administration.

“Since 2018, the US has ended both bilateral aid for Palestinians and contributions for the UN Relief and Works Agency for Palestine Refugees (Unrwa).

Those moves came after the PA cut off diplomatic contacts in response to President Donald Trump’s decision to recognise Jerusalem as Israel’s capital and move the US embassy to the city from Tel Aviv.”

That omission is particularly relevant in light of the fact that the BBC did tell readers that:

“Mr Shtayyeh warned that if the PA experienced a financial collapse it would have to put security personnel in the occupied West Bank on unpaid leave.”

Given the PA’s rivalry with Hamas, that scenario is of course extremely unlikely.

Obviously the issue of the Palestinian Authority’s policy of spending some 7% of its annual budget on payments to terrorists and their families is relevant to this story but the last time BBC audiences heard anything about that topic was eleven months ago.

BBC News inverts cause and effect in US aid story headline