John Ware's documentary is a welcome step but the BBC needs to put its own house in order too.

The edition of ‘Panorama’ titled “Is Labour Anti-Semitic?” which was aired on BBC One on July 10th (available here on iPlayer or here) swiftly garnered reactions from the Labour party itself – which described it as an “authored polemic” – and its supporters as well as from bodies such as the Chief Rabbi, the JLC and CST and the Board of Deputies of British Jews along with many others. 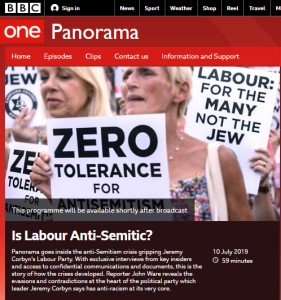 There is, however, something more to be said about the core topic addressed by John Ware.

At 08:58 Ware told viewers that: [emphasis in italics in the original]

Ware: “Before Jeremy Corbyn was elected Labour leader in 2015, complaints in the party about antisemitism were rare. […] After Mr Corbyn became leader, party membership surged, some attracted by his decades of radical Left activism.

Interviewee: “So there’s an increase in members from a particular perspective and they brought with them a particular world view which unfortunately allowed breathing space for antisemitism to arise.”

That “world view” of course existed in British society long before Corbyn’s election to the party leadership in September 2015 and it was described later on in the film (from 10:21) as follows by Dr Dave Rich.

Rich: “Many people on the Left they define themselves by being anti-racist and actually they define the Right as being racist. So in their world they can’t be antisemitic because they are Left-wing.”

Ware: “For Jeremy Corbyn and those who share his world view, part of being anti-racist is near unconditional support for the Palestinian cause. Yet the campaign for Palestinian rights can blind some anti-racists to another kind of racism against Jews.”

Rich: “If you look back at the kind of antisemitism that existed in the 1930s – Jews using their money, Jews controlling governments – instead you started to see the same ideas were being directed towards Israel. These kinds of ideas are much more acceptable on the Left and in pro-Palestinian campaigning circles because they talk about Israel; they don’t talk about Jews. But actually underneath the surface, it’s the same ideas.”

If one wishes to understand why antisemitism is still so sociably acceptable in the UK in the 21st century that it is not a barrier to becoming a member of – or even a leading figure in – one of Britain’s most prominent political parties, one cannot ignore the country’s biggest and most influential media organisation.

For example, among the images seen during the above section of the programme was this one, apparently from a demonstration in London:

The picture used on that banner – and the falsehood behind it – is a product of inaccurate and irresponsible BBC reporting.

Long before Jeremy Corbyn took over the Labour party leadership the BBC was whitewashing the antisemitism of British politicians and facilitating the spread of antisemitic discourse on its message boards. Over six years ago the BBC was already promoting the notion that “it’s very difficult to criticize the Israeli government without in turn being told you’re antisemitic and some people would say that Jews see antisemitism everywhere” and that was not a one-off case by any means. In its various ‘backgrounders’ supposedly explaining antisemitism to its audiences, the BBC has repeatedly promoted the Livingstone Formulation.

The BBC has hosted known antisemites and Holocaust deniers and provided often offensive anti-Israel campaigners with an unhindered platform from which to promote falsehoods. It has whitewashed antisemitism in British society from sport to charities and academia and has promoted antisemitic stereotypes. BBC audiences have been repeatedly exposed to antisemitic tropes concerning ‘the Jewish lobby’ or ‘the Israel lobby’ and stereotypes about ‘rich Jews’ even from BBC staff and contributors. And of course the BBC has failed to respond appropriately to complaints from the general public concerning antisemitism in its own content.

Since the issue of antisemitism in the Labour party became prominent, the BBC has repeatedly shown itself to be incapable of reporting on that topic accurately, impartially and in a manner which provides the British public with the full range of information.

So while John Ware’s Panorama documentary about institutional antisemitism in the Labour party is obviously a very welcome step in informing the British public about the anti-Jewish racism in their society, it is also necessary for the BBC to put its own house in order by undertaking a serious examination of its own coverage of – and contributions to – that worrying phenomenon.

One to watch on BBC One

BBC News not sure whether Corbyn controversy mural antisemitic or not