His email provides yet more evidence that, even by Guardian standards, Bell is an extremist in his hatred of Israel and what appears to be his utter contempt for the values and concerns of British Jews.

We’ve been tweeting about cartoons by Guardian cartoonist Steve Bell published over the last two days which are predictably dismissive of charges of antisemitism against the Labour Party, in mocking the party’s deputy leader Tom Watson, an outspoken critic of Jeremy Corbyn’s handling of the crisis.

For the second day in the row, Bell has mocked Watson and, by extension, anyone who takes antisemitism in the Labour Party seriously. pic.twitter.com/u20tXpMks5

We observed that such cartoons are “predictable” because Bell has a long history of openly mocking charges of antisemitism, and was responsible for one cartoon in 2012 that evoked nearly Der Sturmer style classic antisemitic imagery in suggesting Jewish control of non-Jewish world leaders.  The cartoon wasn’t removed, even after widespread complaints of antisemitism, but it did elicit a rare rebuke by their then readers’ editor. 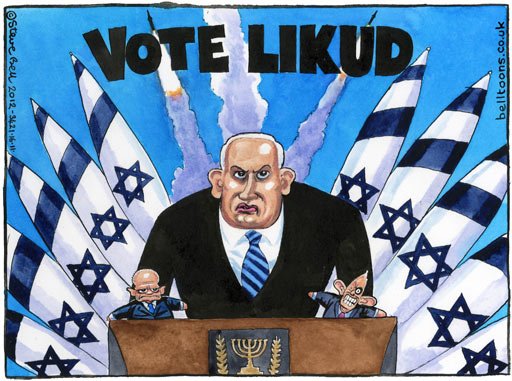 Also, see this Bell cartoon from 1998, which suggests that the Jewish God is vengeful and supremacist.

Since 2015, Bell has consistently defended Jeremy Corbyn from charges of antisemitism, and even came to the defence of Ken Livingstone in 2017 after the former London mayor was expelled from the party for suggesting that Hitler was once a Zionist.

Today, it emerged that Bell sent an email to the Guardian staff complaining that editors allegedly decided not to run his latest attack on Watson – which would be the second time in a year that a Bell cartoon was rejected. 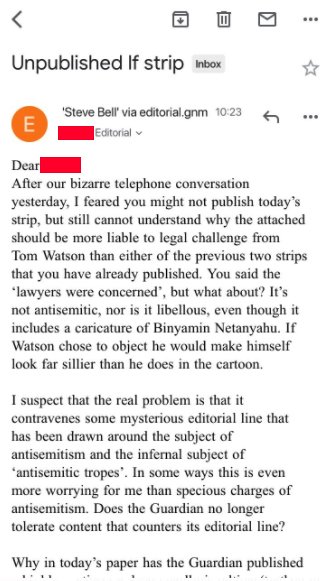 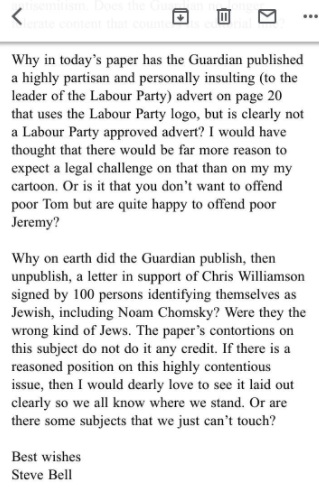 Here’s the cartoon in question (which, as we noted, didn’t run).

It’s hard to know with certainty what Bell’s point is, but we read it as suggesting that the Israeli prime minister himself provokes antisemitism or engages in behavior that is antisemitic.

Though we’re not quite sure why editors nixed this cartoon, the real issue is Bell’s email, which demonstrates just how dismissive he is of those who’ve leveled “specious” charges of antisemitism in Labour, and how he actually seems to think that the Guardian – yes, the Guardian! – is too concerned about offending Jews.  (Note how he also references that letter the paper removed last week from its web site which, as we posted about at the time, defending Chris Williamson, which had been signed by fringe anti-Zionist Jews, and a few non-Jewish anti-Semites.)

His email provides yet more evidence that, even by Guardian standards, Bell is an extremist in his hatred of Israel and what appears to be his utter contempt for the values and concerns of British Jews.

UpdateJuly 18th: Today, Bell published another in his series of cartoons on Tom Watson.  This one, published at his own site, but not at the Guardian, shows Netanyahu as a puppet-master controlling Donald Trump and Boris Johnson.

Like Loading...
Tags from the story
Anti-Zionism, Antisemitism, Guardian, Israel, Jeremy Corbyn, Labour Party (UK), Steve Bell, Tom Watson, Uncategorized
Written By
Adam Levick
More from Adam Levick
“terrorism” does not have any real meaning other than “a Muslim who...
Read More