Once again the BBC promotes the falsehood that the Gaza Strip is 'under siege'.

When, in the summer of 2014, the BBC began describing the counter-terrorism measures employed by Israel along its border with the Gaza Strip as a “siege” we noted that the definition of that term is “a military operation in which enemy forces surround a town or building, cutting off essential supplies, with the aim of compelling those inside to surrender” and commented:

“A besieging army does not ensure and facilitate the provision of humanitarian aid including food and medical supplies to those it surrounds. It does not supply them with 50% of their electricity supply, with oil and diesel or with cooking gas. It does not help them export their produce and give their farmers agricultural training. It does not evacuate their sick and treat them […] in its own hospitals.”

Nevertheless, the BBC continues to promote that Hamas approved terminology and the latest example came in the August 1st edition of the BBC World Service radio programme ‘The Food Chain’ (repeated on August 4th) which was titled ‘Food under siege’. 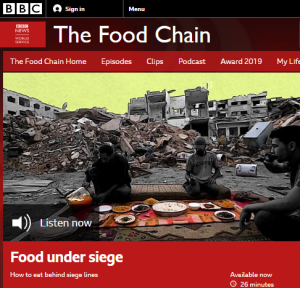 “When access to a city is blocked, food supplies quickly plummet, electricity and water become scarce, and people are forced to find new ways to feed themselves. Black markets thrive, and some may risk their lives to feed their families. But a dwindling food supply can also inspire creativity and compassion.

Emily Thomas meets people who have lived under siege in Aleppo, Syria, the Gaza strip, and Sarajevo, Bosnia-Herzegovina. They reveal the uncomfortable reality of eating behind siege lines.

A journalist tells us how it feels to eat abundantly in a café in the middle of a city where most are struggling to eat. An electrician explains why feeding cats in the middle of a war-zone felt like a statement of compassion and resistance. And a cook explains how to run a catering company when electricity, water and food are scarce.”

Presenter Emily Thomas opened the programme with a description of a siege and went on with some clear signposting. [emphasis in italics in the original, emphasis in bold added]

Thomas: “Your home is surrounded. Enemy forces are camped outside the city. They’ve cut off electricity and water supplies and sealed off the main roads out. You can’t leave. Nothing and no-one is coming in. But you still have to eat. Could finding a way to eat well become the ultimate act of defiance? […] In this episode people who’ve lived under siege in Aleppo in Syria, Sarajevo in the former Yugoslavia and the Gaza Strip are going to reveal the uncomfortable reality of eating behind siege lines where black markets can thrive and people may risk their lives to feed their families. We’ll hear that even as food supplies run out, creativity and compassion can flourish. How we eat behind siege lines can show our humanity and resilience.”

The first part of the programme related to Sarajevo and the last to Aleppo. In the middle (from 11:50) listeners heard a section which began with more inaccurate framing of the Gaza Strip as being ‘under siege’ from Thomas.

Thomas: “Preserving a food culture is perhaps more important than ever when living under siege.”

Voiceover: “We make a whole variety of regional foods and as well as Arabic dishes we make pastries, different kinds of bread, chicken and rice, couscous; everything you’d expect to find in Gaza.”

Thomas: “But how much variety would you expect when more than half of the population is classed as food insecure by the UN? This is Wada Younis [phonetic]: one of a group of women who runs a catering company in Gaza. […] More than half of the territory’s labour force are unemployed so customers are in short supply.”

After her interviewee had explained that her clientele includes “women who don’t have the time to cook at home” and people with “more money”, Thomas told listeners:

Thomas: “A blockade, which Israel says it’s imposed because of security concerns, has severely restricted imports and exports and the movement of people. Gazans are not allowed to farm in the mile-wide Israeli declared buffer zone on the border: an area with some of its best arable land. Add to that an intermittent power supply and almost every household relying on tanker trucks to deliver their water.”

Notably listeners heard no explanation of those “security concerns” and the words Hamas and terrorism did not cross the BBC presenter’s lips. The inconvenient fact that the Gaza Strip also has a land border with Egypt was likewise airbrushed from Thomas’ portrayal.

Imports to the Gaza Strip are of course not “severely restricted” unless they come under the category of weapons or dual-use goods that can be employed for terror purposes and obviously that does not include food. Even anti-Israel NGOs do not claim that the buffer zone (the width of which varies from place to place) is a mile – i.e. 1,609.34 meters – wide. Gaza’s “intermittent power supply” of course has nothing to do with Israeli counter terrorism measures and everything to do with internal Palestinian disputes. In fact Israel continues to supply more than half of the Gaza Strip’s electricity and about 10 million cubic meters of water a year: hardly the actions of a ‘besieging’ force.

Nevertheless, the BBC World Service is apparently quite happy for its audiences to be misled about the reasons for the chronic power shortages in the Gaza Strip because listeners next heard Younis repeat that falsehood.

Voiceover: “The siege causes loads of problems but the main one is electricity. Sometimes there’s no electricity and when we’re baking or preparing dishes it’s a real issue. And the other problem is the financial situation; people can’t afford much and they don’t all have incomes. Raw materials aren’t available and can be really expensive which means we can’t always make a profit. Sometimes we have to sell at cost price to keep our customers.”

Thomas: “Are there some ingredients it’s impossible to get hold of at all?” 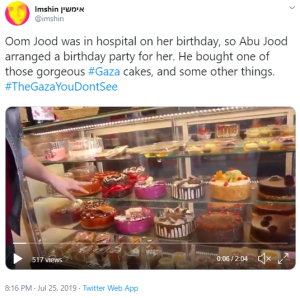 Although Younis replied in the affirmative, the rest of her response showed that the real answer to that question is no.

Voiceover: “Yeah – the ingredients for desserts and cakes aren’t really available and if they are, they’re only in a few shops and are really expensive so we can’t afford to make them. And you just can’t get the kind of ovens we need in Gaza. You can only get them outside. And we often have to throw vegetables away because the electricity cuts out and the fridges go off.”

Thomas: “The electricity then poses a real problem. What about the water supply?”

Voiceover: “You can’t drink the water in Gaza or cook with it. It’s not clean. So we have to buy bottled water for drinking and cooking as well as for washing ingredients to avoid contamination.”

Making no effort to inform listeners why residents of the Gaza Strip face chronic shortages of electricity and clean water, Thomas summed up:

Thomas: “So the electricity supply is intermittent, the water supply is difficult too, you can’t get hold of all of the equipment and the ingredients that you need. It sounds really tough to be running a catering company.”

She later went on to claim that “food is limited” in the Gaza Strip.

Thomas: “Do you think that food and enjoyment of food and the sharing of food become more important when you’re living in the middle of a political situation like this and when food is limited?”

In her closing remarks (25:42) Thomas referred to “inhumane situations” despite the fact that no context to the measures imposed on the Gaza Strip in order to combat inhumane terrorism had been provided.

Thomas: “To me their story of food behind siege lines, like the others we’ve heard, shows not just people’s resilience but also the power of food to comfort and prove our humanity when we’re placed in the most inhumane situations.”

So why did the BBC World Service mislead its audiences by inaccurately framing the Gaza Strip as being ‘under siege’ in accordance with Hamas talking points and misinform them with regard to the background to the chronic problems with water and electricity supplies?

At the end of the interview with Wada Younis, listeners heard that it was set up by the BBC’s Gaza Strip office.

Thomas: “Many thanks to our colleague in Gaza Jihad Masharawi for arranging that interview.”

This is of course far from the first time the employees at the BBC’s Gaza office have amplified Hamas propaganda and neither is it the first time that Masharawi has been involved in producing BBC content that promotes the false notion that the Gaza Strip is ‘under siege’ by Israel.

How the BBC can possibly claim that this item meets editorial guidelines on either accuracy or impartiality is unclear.